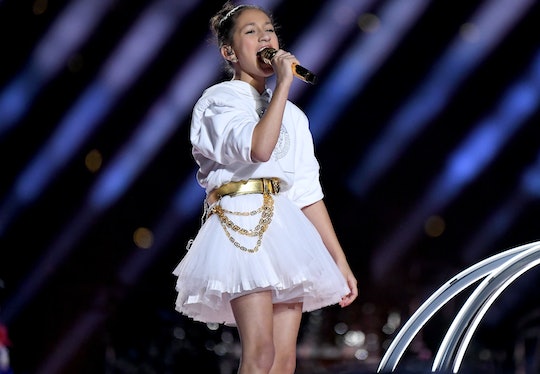 "It's the coolest thing to watch my stepsister sing," Rodriguez's 15-year-old daughter Natasha told Entertainment Tonight. "I'm so proud of her every time I see her and her voice is just angelic. My favorite part was whenever the beat dropped and the crowd just went crazy and the energy in the stadium was unreal."

For Rodriguez's 11-year-old daughter Ella, however, the best moment of Sunday's halftime show came when Emme took the stage and sang a rendition of Lopez's song "Lets Get Loud" and Bruce Springsteen's "Born in the U.S.A." "My favorite part was when the little girls came out and Emme sang," Ella told Entertainment Tonight. "It was really good."

Emme's father Marc Anthony also praised his daughter for her talent. "Emme, Daddy is so proud of you," the singer wrote on Instagram following his daughter's performance. "You are my [heart] and I am forever yours." Lopez and Anthony welcomed Emme and her twin brother Maximilian David Muñiz in 2008.

While much of the country was blown away by Emme's vocal talents, isn't the first time the 11-year-old has taken the stage to sing alongside her mother. She's also appeared in Lopez's music video for Limitless and sang the duet with her mother during Lopez's It's My Party tour. In fact, Sunday's Super Bowl halftime show wasn't even the first time Emme's singing has left the internet abuzz. In May 2019, for instance, Lopez shared a YouTube video that featured, among other things, Emme absolutely crushing Alicia Key's "If I Ain’t Got You."

With two talented singers as parents, it's not altogether surprising that Emme has the talent she does. But while Emme has so far performed most often with her mother, Lopez previously told Entertainment Tonight that she thinks her daughter's singing voice actually sounds more like her ex-husband, Marc Anthony's. "I say she's got her daddy's voice," Lopez said.

Although Lopez and Rodriguez remain, for the moment, merely fiancés, it seems their kids already count themselves as family, describing each other as stepsiblings. Lopez and Rodriguez announced their engagement in March 2019 after roughly two years of dating. And, according to US Weekly, the pair are reportedly set to officially tie the knot sometime this summer. Who knows, maybe Emme will blow us all away with an incredible wedding performance.

More Like This
Janet Jackson's Son Eissa Is A Little Musical Prodigy In The Making
Ciara’s Kids Make The Sweetest Cameo In Her New Song “Treat”
Jennifer Hudson Is A Proud Mom, An Accomplished Artist, & Now An EGOT Winner
Chris “Ludacris” Bridges On Creating The World He Wants For His Daughters