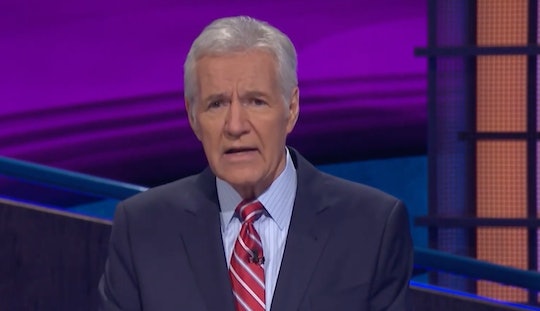 Fans of the beloved gameshow Jeopardy! were on the receiving end of some shocking news on Wednesday, March 6. No, the show isn't ending — it's actually something much more sinister. That's because Alex Trebek announced he's been diagnosed with stage 4 pancreatic cancer. And fans are rallying behind him.

Trebek, 78, has been hosting the syndicated game show since 1984, according to CNN. This means several generations of viewers have never known a time when he wasn't on their TV screens in the evenings. In a video message posted Wednesday via Jeopardy's official Twitter account, Trebek revealed his diagnosis. "I have some news to share with all of you, and it's in keeping with my longtime policy of being open and transparent with our Jeopardy fan base," he said. "I also wanted to prevent you from reading or hearing some overblown or inaccurate reports regarding my health. So therefore, I wanted to be the one to pass along this information."

Trebek went on to deliver the shocking news:

Just like 50,000 other people in the United States each year, this week I was diagnosed with stage 4 pancreatic cancer. Now normally, the prognosis for this is not very encouraging. But I'm going to fight this. And I'm going to keep working. And with the love and support of my family and friends — and with the help of your prayers also — I plan to beat the low survival rate statistics for this disease.

Trebek light-heartedly explained why it was imperative to win his battle against cancer. "Truth told, I have to. Because under the terms of my contract, I have to host Jeopardy! for three more years," he said. "So help me. Keep the faith, and we'll win. We'll get it done. Thank you."

You can probably imagine the shockwave that resulted from such an earth-shattering revelation. Heartfelt messages of support soon followed on Twitter. One person commented, "What is, something to make my heart hurt for $2000 please."

Another Twitter user wrote, "So heartbroken. Miracles happen every day, and it’s not something medicine has any jurisdiction over. Keep fighting Alex, and keep believing. This is a matter of personal faith and courage, not statistics. We are with you all the way."

Another person shared, "As the daughter of a man who is also battling stage 4 cancer with a low survival rate, know this, Mr. Trebek: you can beat the odds. You can overcome the obstacles. You can surpass all expectations. As a lifelong Jeopardy viewer, I wish you all the best."

Another delared, "This man beat pancreatic cancer and went on to live a very long healthy life Who is Alex Trebek." (I'm not crying, you're crying.)

As USA Today reported, Pat Sajak and other celebrities also reacted to the news via social media. The Wheel of Fortune host tweeted, "The Sajak family is deeply saddened to hear of Alex Trebek’s struggle with cancer. Our hearts go out to him and his family. But there is no one I know who is stronger and more determined, and I would never bet against him. We, and the entire country, are pulling for you, Alex."

Ken Jennings — record holder for winning the most Jeopardy! games — compared Trebek to broadcast journalist Walter Cronkite. He tweeted, "I’ve said this before but Alex Trebek is in a way the last Cronkite: authoritative, reassuring TV voice you hear every night, almost to the point of ritual."

Jennings continued, "One thing I know for a fact: Alex is very aware of how much he means to millions of people, and how we will be pulling for him...I hope that’s a comfort. And I hope some very good L.A. oncologists are getting ready to have their mispronunciations corrected."

Although Trebek and his fans seem incredibly positive about the news, as the gameshow host hinted, the prognosis of stage 4 pancreatic cancer isn't good. At all. In fact, the 5-year survival rate for it is approximately 3 percent, according to the American Cancer Society — meaning only 3 out of 100 people are still alive five years after being diagnosed.

Still, it must be encouraging for Trebek to know that he has a massive support system — and undoubtedly the best team of doctors on his side. And if anyone can beat this out of sheer willpower alone, he can. We're all pulling for you!

More Like This
'Caillou' Is Officially Getting A CGI Reboot Whether People Like It Or Not
Viral TikTok Breaks Down How Beautifully Bluey Depicts One Character’s Infertility
'Squid Game' Is Coming Back For Season 2 On Netflix: Here’s What Parents Need To Know
There's Now A Tampon Shortage... Because Baby Formula Wasn't Stressful Enough