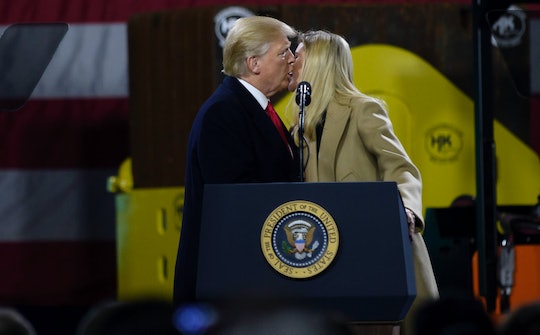 All The Creepy Things Trump Has Said About Ivanka

Nobody ever accused President Donald Trump of being overly-sensitive about the words that come out of his mouth, as far as I know. The former real estate developer and reality star has a history of seemingly saying the first thing that comes to his mind without much thought of the potential consequences. Some people might find this charming. I'm thinking his daughter... considerably less so. The president has made a real meal out of discussing his daughter, and all the creepy things Trump has said about Ivanka must make family dinners crazy awkward.

The president has five children from three marriages; along with daughter Ivanka, he also shares sons Donald Trump Jr. and Eric Trump with his first wife Ivana Trump. He has daughter Tiffany Trump with ex-wife Marla Maples, and youngest son Barron with the First Lady Melania Trump. While he seems affectionate enough with the rest of his kids, his daughter Ivanka gets the lion's share of his public affection. Always has, from what I've seen. Ivanka and her husband Jared are two of Trump's closest advisers in the White House, with media outlets speculating that Ivanka's role is more akin to First Lady than Trump's actual wife, Melania Trump. This degree of nepotism has made some people a little uneasy... but the creepy things Trump has said about his daughter? I think it's safe to say those comments make almost everyone uneasy.

Romper reached out to the White House for comment and did not immediately get a response.

Adult film star Stormy Daniels claims that she and President Trump had an affair in 2006, while wife Melania was pregnant with son Barron. During an interview with In Touch in 2011, she admitted that Trump told her she reminded him of his daughter:

He told me once that I was someone to be reckoned with, beautiful and smart just like his daughter.

It's important to note that this is only Daniels' version of the story, and that the president has denied the affair.

While the Stormy Daniels' comment has not been verified, Trump has said plenty of incredibly uncomfortable and downright inappropriate things about his daughter on the record. Like when the two of them sat down together for a 2016 interview on The Wendy Williams Show; when Williams asked Trump what their shared favorite things might be, Ivanka answered golf and real estate. Disappointed, Trump replied:

I was going to say sex, but I guess I can relate to golf and real estate.

If She Wasn't My Daughter

This appears to be one of Trump's fantasies; what might happen if Ivanka wasn't his daughter? During an appearance on The View to promote his reality show The Apprentice in 2006, Trump had this to say about his daughter:

Yes, it's terrible. Almost as terrible as what he said during an interview with Rolling Stone in 2015, when he was quoted:

Yeah, she's really something, and what a beauty, that one. If I weren't happily married and, ya know, her father . . .

Ivanka Trump began her career as a model in the late 1990s, and I doubt anyone would dispute that she's a beautiful woman.

Least of all her father, who takes great pride in her physical attributes and never misses an opportunity to talk about her body in particular. Like that this lovely quote from one of Trump's many appearances on The Howard Stern Show in 2004, when he actually gave the host permission to refer to his daughter as a "piece of ass,"

You know who’s one of the great beauties of the world, according to everybody? And I helped create her. Ivanka. My daughter, Ivanka. She’s 6 feet tall, she’s got the best body. She made a lot money as a model—a tremendous amount.

During the 2006 interview with The View, when the hosts asked him how he would feel if Ivanka posed for Playboy, he said:

It would be really disappointing — not really — but it would depend on what's inside the magazine. I don't think Ivanka would do that, although she does have a very nice figure.

There are many things Trump could say to compliment his daughter (or any of his other children, for that matter); she's a good mom, she's a savvy businesswoman, a strong public speaker.

But he keeps dipping back into that beauty and sexuality well whenever he gets the chance.

And it's so not OK, I'm not sure what else to say about that.