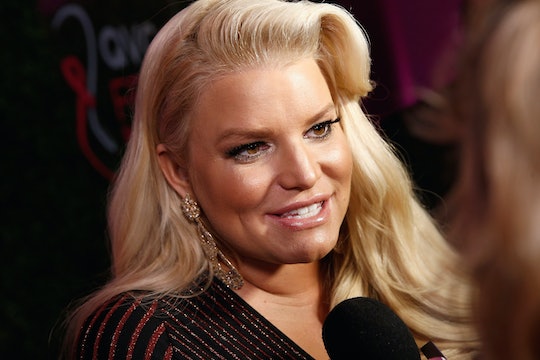 Jessica Simpson is on the tail end of her third pregnancy. If you've been following along with her Instagram feed, you know this girl has had enough. This pregnancy has been a rough one for the fashion designer and former singer, but she's handled it with her sense of humor firmly intact. And it's a good thing Simpson knows how to laugh at life, because she is so often the brunt of criticism as a parent. As an ode to all she's going through, here are all the times Simpson dealt with mom shamers in the best way possible. By rarely even acknowledging their existence.

Simpson and her husband, NFL football player Eric Johnson, are parents to 6-year-old daughter Max and 5-year-old son Ace and expecting another little girl in the coming weeks. Jessica Simpson has a reputation for being hilariously, painfully honest about her life (just this week she shared an Instagram post about breaking a toilet seat that was just marvelous). One would think this honesty would sort of protect her from critics since she's so open about her own human flaws. Apparently one would be very wrong. Mom shamers love to scroll through Simpson's Instagram feed looking for trouble that isn't there.

Sometimes I think Jessica Simpson's greatest weapon is her ability to ignore people. Just as she did when critics were going on and on about her son Ace' long hair for years, as per Mom.Me. Because I guess boys can't have long hair or something? Whatever other people thought, Simpson only cut her son's hair when he asked for it at 5 years old.

Because that's how you deal with mom shamers. Don't even allow their nonsense to break through.

Last July, Ace went swimming with his dad. I know, devastating. What were the mom-shamers bothered by this time around? Ace is wearing a cast in the pool. Critics accused Simpson of not being responsible with her son, as per In Style, and she really wasn't having it. As she told Extra at the time:

I posted Ace in the pool with a cast on because there is really no stopping a child, that’s him, he only has to have the cast on for three weeks ... I don’t even know if the cast molded on to him yet. Listen, it makes him happy and it’s kids being kids. He is in my husband’s hands. I know he’s okay.

When Simpson and her daughter Max enjoyed a mommy-daughter day at MAC Cosmetics playing with makeup, people were obviously distressed, as per Glamour. This time around Simpson didn't have to say a word. Her fans came to her rescue and defended her on Instagram, with one person noting:

People need to chill the eff out! It's a mummy/daughter day. Most girls would have thought this was so fun. She's not doing anything wrong or illegal.

Why bother addressing critics when your fans will do it for you, right?

Jessica Simpson and her family are big fans of Halloween, but in 2017 fans were all over their costumes for all the wrong reasons. Little Max dressed as Belle from Beauty and the Beast, and Insider noted that fans accused Simpson of dyeing her daughter's hair. Again, Simpson didn't bother responding... perhaps because the temporary hair dye she presumably used eventually washed out and she let that do the talking for her.

Back in 2017, Simpson dared to share a photo of her daughter Max wearing a two-piece bathing suit and of course people went wild, saying the photo was inappropriate. Yet again, Simpson's reaction was to remove the adorable picture of her daughter and ignore everyone.

Jessica Simpson is one of those parents who happily shares her life with her adorable kids. And instead of considering ourselves lucky, people look for excuses to mom shame her. Because no one wants us to just have normal nice things.