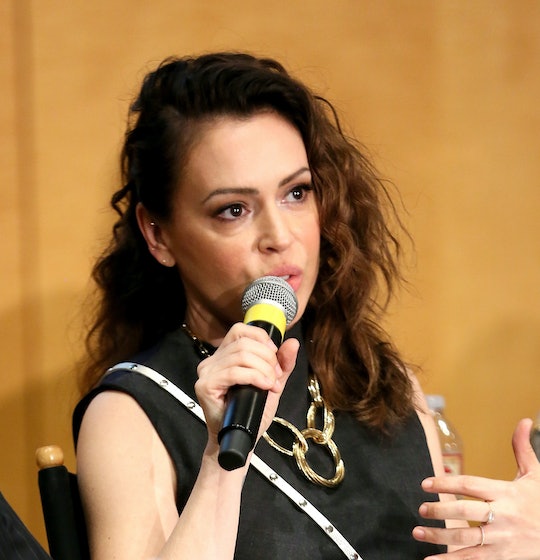 Georgia is making headlines for passing an antiquated anti-abortion law prohibiting doctors from performing abortions after a heartbeat can be detected in the fetus. The public is calling for action in the wake of this legislation, but no one has gone further than Alyssa Milano. The actress-turned activist suggested an interesting plan of action after the law passed: Milano called for a sex strike until Georgia lawmakers repeal the law.

The actress introduced the idea on Twitter, as TMZ reported, calling for followers to join her. She stated in the tweet, "Our reproductive rights are being erased." The 46-year-old went on to say, "we just cannot risk pregnancy," in the current climate. Milano revealed in her tweet that she wouldn't be "having sex" until women were granted full "autonomy" over their bodies again. She hashtagged the movement "#SexStrike," asking followers to "Pass it on." The tweet has been shared more than 7,000 times and received more than 20,000 likes on Twitter. It's unclear, however, how many women intend to join Milano.

"Our reproductive rights are being erased. Until women have legal control over our own bodies we just cannot risk pregnancy. JOIN ME by not having sex until we get bodily autonomy back," Milano tweeted.

Other movements have cropped up in the wake of Georgia's new anti-abortion legislation, according to Fox News. Some have called for a boycott of the film industry there, which is thriving. As noted by TMZ, the aforementioned movement could be slightly more effective, as it puts a financial strain on the state. So far Killer Films, Blown Deadline Productions, and Duplass Brothers Productions have come out in opposition of the law, according to CNN. Filmmakers J.J. Abrams and Jordan Peele released a joint statement about the bill on Friday, saying they'd stand "shoulder to should with the women of Georgia." The pair are set to film a new show, Lovecraft County, in Georgia soon. Abrams and Peele have vowed to donate 100 percent of their episodic fees to the ACLU and Fair Fight Georgia as they take on the bill, CNN said.

"Governor Kemp's 'Fetal Heartbeat' Abortion Law is an unconstitutional effort to further restrict women and their health providers from making private medical decisions on their terms. Make no mistake, this is an attack aimed squarely and purposely at women," the statement said. "We encourage those who are able to funnel any and all resources to these organizations."

Still, Milano's call to action is a noble effort toward making change, spreading awareness, and protecting women in Georgia and other states with similar laws.

Gov. Brian Kemp signed the "heartbeat bill" into law on Tuesday, CNN reported. The American Civil Liberties Union has said it plans to challenge the bill in court. As it stands, the law will go into effect January 1, 2020, per CNN. Other states have similar laws, or are considering them. The New York Times reported that Alabama postponed a vote on a potentially more restrictive law on Thursday.

Under Georgia's new law, women could be penalized criminally for terminating a pregnancy, or having a miscarriage, according to Business Insider. The law states that a fetus is a full person in the eyes of the law, meaning termination could be considered manslaughter or murder. Once the law is in place, women could face jail time for having abortions after the allotted window of time, which is slim.

The outrage of celebrities like Milano, and others, in the wake of Georgia's new abortion law is both necessary and understandable. Many women and men who support the repeal of the law have praised famous folks for speaking out in whatever ways to help spread the word. Milano's sex strike may not lead to change within the government, but it does help spread awareness, which is equally important in times like these.

More Like This
OB-GYNs On How The End Of Roe Changes How They Can Care For Us
Considering Getting A Tattoo While Pregnant? Here’s What To Know
22 Summer-Inspired Names For Your Totally Laid-Back Baby Boy
21 Roman Baby Boy Names With Ancient Appeal