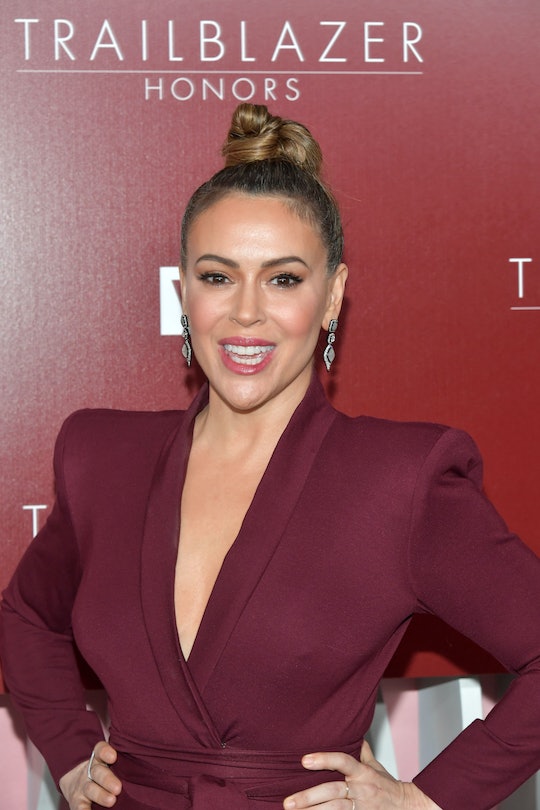 If there's one thing history has slowly, inexorably taught us it's that you really shouldn't mess with women. Not with our rights, our choices, or our ability to stand together if you're going to go ahead and mess with the first two. So when the state of Georgia passed HB 481 last month, women leaped into action. One woman in particular, it seems. Alyssa Milano's response to the "Heartbeat Bill" has been swift and, hopefully, effective. Because she's managed to galvanize much of Hollywood to stand in solidarity with the women of Georgia as their reproductive rights get stripped back.

The actress and #MeToo activist is taking a stand against the "Heartbeat Bill," as per USA Today, a bill passed in Georgia that would make abortions illegal as soon as a fetal heartbeat could be detected. Which, as most people know, happens when a woman is around six weeks pregnant. Right around the time many women might be finding out they're expecting or even earlier. In other words, this effectively bans abortions in most cases across the state... and there are many in the entertainment industry who are speaking out. A letter has been signed by more than 100 of the biggest names in Hollywood threatening to boycott filming in the state of Georgia if it does, indeed, become law. This bill is presently just waiting to be signed by Gov. Brian Kemp.

This letter was written by Alyssa Milano and addressed to Georgia House Speaker David Ralston and Gov. Brian Kemp. In it, she and the dozens of other actors who signed it vow to boycott filming in the state of Georgia if the bill is passed, as per Entertainment Tonight:

This dangerous and deeply flawed bill mimics many others which have already been deemed unconstitutional. As men who identify as small-government conservatives, we remind you that government is never bigger than when it is inside a woman’s body or in her doctor’s office. This bill would remove the possibility of women receiving reproductive healthcare before most even know they are pregnant and force many women to undergo unregulated, hidden procedures at great risk to their health.

On Tuesday Milano hand-delivered the letter to the Georgia capitol, and shared the video on Twitter. And she didn't do it alone; she showed up with Georgia voters who oppose the "Heartbeat Bill" as well.

In the video, Milano tried to bring the 30 voters in to deliver the letter, but was only allowed to enter alone. She noted in a press conference that she was asked if she was a voter and she responded:

Actors aren't the only members of the entertainment industry threatening to boycott if Georgia follows in the footsteps of states like Kentucky and Mississippi (where the governors have already signed the "Heartbeat Bill" into law, as per USA Today). The Writers Guild has also shared a letter explaining that they will reconsider working in Georgia because such a law would make the state an "inhospitable" place to work, as per The Atlanta Journal-Courier.

It will be interesting to see how Gov. Kemp moves forward with so much potential opposition.

Here's hoping he thinks better of it.