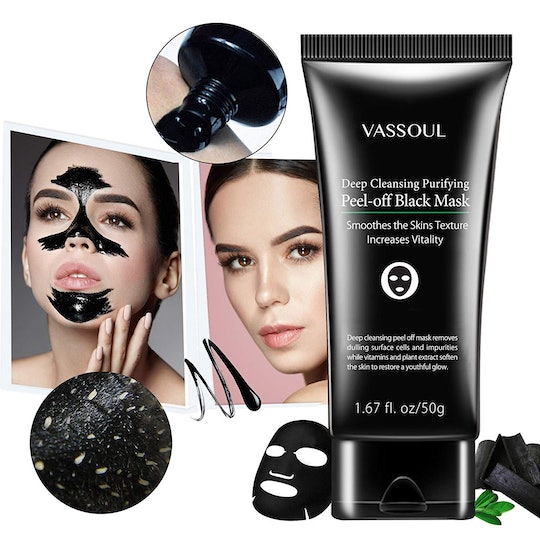 It's only a week into November and stores are already pulling out all the stops in preparation for Black Friday — the unofficial holiday of the fall season. This year, more and more stores are starting their Black Friday deals early. It makes sense. If your store is already decorated for the holiday, why not have some sales to go with it. But online stores are getting into it as well, especially the mega-giant retailer, Amazon. Amazon's Black Friday beauty deals hit early this year, and as usual, they're ridiculously hard to beat.

Amazon is known for their rock-bottom pricing model that lures shoppers in... and before they know it, they've spent $300 on books, paper towels, and sheets, when all they wanted was a few paper face masks. The sales are rotating, as always, with many timed to be "lightning" deals (which have a maximum number of sales that can be made in a short period of time). Some of the best deals so far have been on hair tools like this straightening brush that retails for nearly $40, but is currently priced for just under $30, and the reviews are amazing. As in, buyers are saying things like "Holy cow ya'll! This thing is amazing!"

And it doesn't stop with hot combs. This year they are taking a more holistic approach to their beauty sales, including everything from essential oil diffusers to sound machines and water flossers.

I just can't quit Amazon. It doesn't matter that I detest the amount of packaging used, or how they know every single habit that I have, and or they're probably listening in on every conversation I have via some backdoor communication channel they have installed in their app, I don't care. They make everything so simple. It doesn't matter what I need; if I need it, the chances are good that they will have it. I don't care if I need scented candles or something completely bizarre like a like a ghost detector because there were some noises in my house that I'm just not sure about, and I'm not sure if it's a dead person or if I've watched too much Haunting of the Hill House on Netflix... whatever I want, they've got it. On the bright side, thanks to Amazon's Black Friday beauty deals, I don't need to look like I've been up all night thanks to my Netflix and lack-of-chill-because-I'm-terrified habit. I don't need to look like I've ever had a blackhead in my life either, since the feared and revered "black mask" is on sale for a ridiculously rock bottom price:

Vassoul Peel-Off Black Mask
Amazon
A viral sensation, this hardcore purifying mask usually sells for $50 but is massively marked down as a Black Friday beauty deal.

Don't forget, there will be Prime early access to these deals, so while they're extending free shipping to all their customers over the next two months, only those of us with Prime will be able to get some of these deals before they sell out. Maybe you need to upgrade your makeup brushes, but have been waiting for the right time. You'd be hard-pressed to find a better deal than this 10-piece-set for $6.

You'll need some place to carry all of your goodies from Amazon's Black Friday beauty sale, and they have just the thing: a cosmetics carry-all and organizer for $14. Realistically, with Amazon's millions of items priced to sell during this holiday season, you might find that you need a few of these organizers to carry all of your new stuff.

And shop smart. If you do your research and combine all of Amazon's coupons, sales, and free shipping, you could be looking at half off or more on the most-coveted beauty products. They're even discounting beauty products from uber-popular brands like The Honest Company, usually not known for their big sales. It's all about the timing. So make a list, check it twice, and get everything you need at Amazon's Black Friday Beauty Sale.

More Like This
15 Super Cute Valentine’s Day Pajamas
These 15 Last Minute Valentine’s Day Gifts Are Total Winners
40 Valentine's Day 2023 Outfit Ideas
Fun, Sexy Maternity Lingerie, For When The Mood Strikes
What Parents Are Talking About — Delivered Straight To Your Inbox