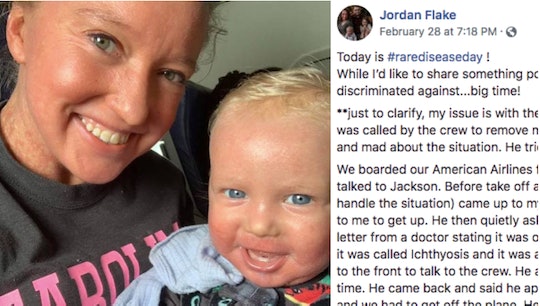 After a mom posted about her experience on a recent flight with her son, both of whom have a rare skin condition, American Airlines has issued an apology to her and addressed the incident. Jordan Flake first shared her story on Facebook on Feb. 28, claiming that she and her son, Jackson, were "discriminated against" and kicked off the flight after an airline employee allegedly asked about her “rash” right before take-off.

"Jackson and I were just discriminated against… big time!" Flake's Facebook post began. “Before take off a man (employee called on flight to handle the situation) came up to my row and asked the 2 men sitting next to me to get up. He then quietly asked me about 'my rash' and if I had a letter from a doctor stating it was ok for me to fly."

As Flake shared in her Facebook post, she and her son have a genetic skin condition called Ichthyosis, which is a rare genetic skin disorder that is characterized by thickened or thin dry and scaling skin.

After Flake reportedly explained the condition, members of the flight crew reportedly said that she and her son would not be able to fly, according to The Independent. "He walked up to the front to talk to the crew. He apparently googled it during that time. He came back and said he apologized but we wouldn’t be able to fly and we had to get off the plane," she wrote in her post.

Flake alleged in her post, as she and her son exited the plane, that "the flight attendant rudely said (without even acknowledging me) 'well she doesn’t have a letter from a doctor, so...'"

Once Flake and her son were removed from the flight, she wrote on Facebook that the airline allegedly failed to retrieve her baggage. "I had to make unexpected childcare arrangements for my daughter at home and I am having to get a ride to the store to get our lotions and some clothes for tomorrow. I have never been so humiliated in my life!" she wrote on Facebook

American Airlines has apologized to Flake and her son and told Romper in a statement it has since opened an investigation into the reported incident.

"Our goal at American Airlines is to create a welcoming environment for all of our customers," the airline said in the statement. "Our Customer Relations team has already spoken to her directly and upgraded them on their American flights. We also refunded the cost of their trip as well."

The alleged incident coincided with Rare Disease Day, a day dedicated "to raise awareness with policy makers and the public of rare diseases and of their impact on the lives of patients."

"Appearance discrimination incidents such as this are very disconcerting," Moureen Wenik, the Executive Director for the Foundation for Ichthyosis & Related Skin Types (FIRST), said in a statement to the media. "This incident on the American Airlines flight shows that more awareness and sensitivity training must be conducted."

Flake also shared more about her reported experience on Love What Matters, and wrote that she "never felt more aware and embarrassed about my skin, or the condition I share with my son." She continued: "If anything comes out of this, I hope it’s that whatever individual put this into action realizes they were wrong and unkind, and will think twice next time. If I am not to judge people based on their gender, skin color, or relationship status, then I should not be judged based off of the way I was born."

More Like This
Chris Evans Has Choice Words For Critics Of The Same-Sex Kiss In 'Lightyear'
Best U.S. Summer Travel Destinations For Families
Activist Imara Jones On Raising Kids Who Celebrate Black Trans Identity
I Started a Magazine for Gay Parents in 1998. Here's What's Changed Since Then.