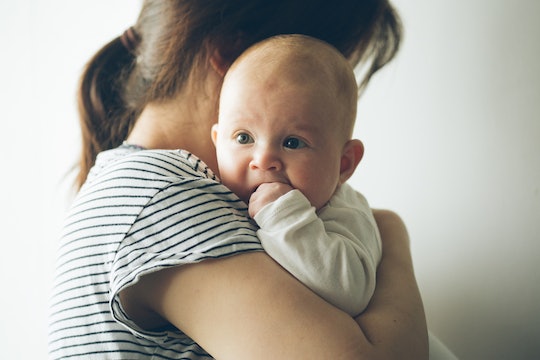 Single Motherhood Among Millennials Is On The Rise

Millennials don't do family the same way that our parents did, that's for sure. Sure, young adults fall in love and love their babies to death just like in the tradition of so many members of their family trees dating back, like, millennia. But millennial moms are entering the workforce at higher rates than their moms and grandmothers ever did, they're putting off having kids 'til later, and — gasp! — some are eschewing marriage altogether. But do the unconventional habits of this generation of new parents really add up to any major shifts in the way Things Are Done? Are there more single millennial moms than any other generation? Well, I've crunched some numbers (or did my homework without touching the actual math), and the short answer is that it sure looks like it.

Even though millennial women may not be having as many babies as their own moms did and doing so slightly later in life — they are currently having more babies than any other generation is right now, because, well, duh. They're the ones at that age, so to speak. According to Pew Research Center, millennials gave birth to 82 percent percent of the babies born in 2015, and more than 1 million of these women — generally accepted to have been born between 1982 and 2004 — every single year. So, it's certainly worth paying attention to patterns that emerge when it comes to what kinds of households and families these new moms are creating.

So, that being said, here's your revelation of the day: A Johns Hopkins University study revealed in 2014 that not only are a significant portion of today's moms unmarried, but most of them are, according to TIME. The study, which focused on women between the ages of 26 and 31, found that a full two-thirds of women in their late 20s were single when their first child was born. And one-third of them were single when all of their kids were born. The study also found that moms without a college degree tend to have more kids and to have them earlier. And, conversely, women with higher levels of education are more likely to be married, researchers found.

Here's how Andrew Cherlin, one of the study's author's summed it up, as TIME reported:

If marriage retains its place anywhere, it would be among the college graduates. The difference between them and the non-college-educated with regard to the percentage of births within marriage is so striking as to suggest a very different experience of early adulthood.

So, yes, educational attainment among millennials plays a huge role in the circumstances in which women have children and what their experiences are like in doing so. After all, college graduates out-earned their counterparts with only a high school education by an average of 56 percent in 2015, USA Today reported. Money doesn't buy happiness, of course, but having it sure can make it more likely that families will be able to afford the necessities they need.

So, there are two very different experiences based on educational attainment, to be sure. But what about based on which generation a mom belongs to? According to recent data from the U.S. Census Bureau, there are identifiable differences there, too. First, most American kids do live in two-parent households. But the percentage of those who do is way down: In fact, 88 percent of kids lived with two parents in 1960, and 69 percent did in 2016. And while only 8 percent of kids lived with a single mom nearly 60 years ago, 23 percent did in 2016. Those stats alone prove that there has been a major uptick in "nontraditional" families throughout the past several decades, and indicate that single motherhood is more prevalent now than it ever was before.

According to data compiled by the website Single Mother Guide, there are two general camps of reasons why a mom is single, and they're pretty evenly split. Of the approximately 10 million single moms in the United States, 49 percent were never married, and the rest are divorced, separated, or widowed.

It's undeniable that the DNA of the American family is changing. And as millennials moms forge their own paths, another generation of kids is growing up just as loved as ever before.

More Like This
Can The Baby Have That?
This Map Illustrates Just How Many States Would Ban Abortion If Roe V. Wade Is Overturned
Keep Talking To Your Kids About Abortion — It's More Important Than Ever
Obamas Issue Powerful Statements After Supreme Court Ends Roe v. Wade