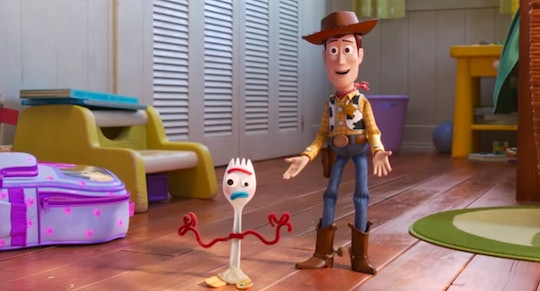 Yes, There Are Sensory-Friendly Screenings Of 'Toy Story 4' For Your Family

Going to the movies is an enjoyable experience for most kids — popcorn, candy, slushy drinks, big cushy seats, and a big bright screen. But for those with sensory processing disorders, going to the movies can be anything but fun. Even if a child has sensory processing issues, it doesn't mean they don't want to see Toy Story 4 just as bad as their peers. But, are there any sensory-friendly screenings of Toy Story 4? Lucky for you, Regal Cinemas is offering one this weekend.

Regal Cinemas' My Way Matinee is a sensory-friendly screening that takes place on the second and fourth Saturday of the month at 10:30 a.m. local time. To make guests feel comfortable and completely at ease, lights will be brighter and the sound will be lower. Plus, guests are encouraged to express themselves as they please. If it means singing, dancing, shouting, or crying, then so be it!

The best part? Tickets are only $6.50, which is a real steal considering the average movie ticket price in the U.S. is about $9, according to Box Office Mojo.

More screenings are planned for the rest of this summer, too, including screenings of Spider-man: Far From Home, The Lion King, The Angry Birds Movie 2, Dora and the Lost City of Gold, and more, according to the franchise's website. A complete list of locations and dates can be found online.

It only makes sense that movie theaters would start catering towards those with sensory disorder issues, autism, and other special needs. According to the Center for Disease Control, one in 68 children will be diagnosed with autism, and most of them will have some sort of sensory processing disorder.

For some children, loud sounds, changes in lighting, textures, and scratchy clothes can cause them to feel overwhelmed and upset, according to Understood.com. The My Way Matinee allows these children a safe place to enjoy movies that most can't see in a regular theater setting.

If you haven't seen Toy Story 4 yet, now is the time. The movie centers around Bonnie and her new found love for Forky, a school craft project that she deems special enough to be a toy, according to IMDb. But Forky believes he's nothing more than a piece of trash. Woody, being the optimist that he is, helps Forky understand just how important it is to be a child's object of affection. But then, Forky gets lost and that's when the new adventure begins.

Judging by the reviews and the ticket sales, it looks like Toy Story 4 is already earning its place as a certified Disney classic. The movie crushed its competitors on opening weekend with over 135 million in ticket sales, according to Deadline. It's been nine years since the last Toy Story was released and excitement over the franchise has not dwindled in the least.

All in all, it's been a very lucrative summer for Disney with Avengers: Endgame, Captain Marvel, and Aladdin doing just as well during their opening weeks, according to Mashable. And now, with My Way Matinees, a broader spectrum of movie goers will be able to enjoy the experience.

A trip to the movies should be a treat for all kids despite their physical or mental capabilities. Cheers to Regal Cinemas for being inclusive of everyone.

More Like This
Lyle, Lyle, Crocodile Is Heading To The Big Screen As A Musical Comedy
Prince George Hosted A “Little Cake Sale” For One Of His Dad's Favorite Charities
Kim Kardashian Had To Pause A TV Interview To Shush Her Noisy Sons In The Audience
People Got Real Judgy After Kate Hudson Shared A Photo Of Her 3-Year-Old In A Stroller