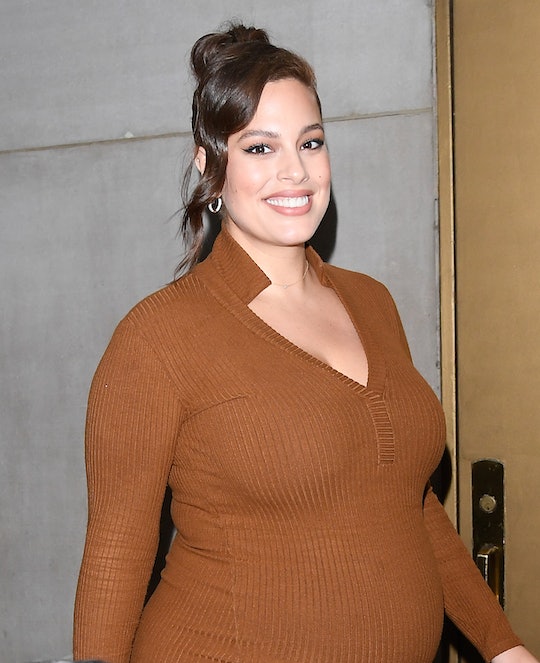 There are few things less glamorous than the diapers that many new moms move into after giving birth. But let me tell you, those things are a game-changer. Sharing her own experience with these parental pampers, Ashley Graham rocked her own disposable underwear in a candid postpartum Instagram post that every new mom should see and read.

Graham and husband Justin Ervin welcomed a healthy baby boy last month and their son, Isaac Menelik Giovanni Ervin, has changed their lives completely. The pair have been open about their experiences as new parents, introducing Isaac to the world and detailing their emotional journey and Graham's birthing experience in a touching YouTube video. Now, Graham is sharing the "messy parts" of recovery and healing after giving birth — starting with a photo of her in her disposable underwear and a poignant message about transparency.

"Raise your hand if you didn’t know you’d be changing your own diapers too," she captioned the photo of her wearing Frida Mom Boyshort Disposable Postpartum Underwear. "After all these years in fashion I never could’ve guessed that disposable underwear would be my favorite piece of clothing but here we are! No one talks about the recovery and healing (yes even the messy parts) new moms go through. I wanted to show you guys that it’s not all rainbows and butterflies!"

Graham received a slew of thankful comments from other moms who have been in the same position. "Lifesaver to all mamas. I love this post and thank you for sharing, makes all of us postpartum mamas feel not so totally alone," wrote Whitney Wolfe Herd, mom and founder/CEO of the dating app Bumble.

"Keep those diapers," said another mom. "You’re gonna be peeing all over yourself for the rest of your life too," adding to hashtag, #momproblems.

This sort of transparency is becoming more common, especially with celebrities like Graham and other keep-it-real mom Chrissy Teigen opening up about the less than picture-perfect aspects of motherhood. After the birth of her oldest child, Luna, with husband John Legend in 2016, Teigen tweeted about her time in diapers and the lack of preparation she had for it. "No one told me I would be coming home in diapers too," she tweeted, and that is unfortunately an all too common reality.

Many new moms face heavy vaginal bleeding and discharge, called lochia, in the weeks after delivery, according to What to Expect. Pelvic floor weakness and related incontinence are also par for the postpartum course, which is why many new moms opt for disposable underwear or "diapers," and oversized pads.

Despite the common nature of this experience, it still can come as a shock to moms who aren't "in the know." The bubble of new baby bliss can cloud the realities of recovery, leaving expectant mothers unprepared and unaware. Had my sister not delivered my nephew a month before I had my daughter, I wouldn't have known about the need for mom-sized diapers until I was wearing them myself. This makes the need for honest and open conversation about postpartum realities all the more necessary. Kudos to Graham for playing her part in that.

More Like This
What You Need To Know About Keloid C-Section Scars
Don't Rush That Post C-Section Bath — You Can Get Infected In More Than One Place
Your Guide To Having Sex After A C-Section
Breastfeeding Twins: Everything You Need To Know