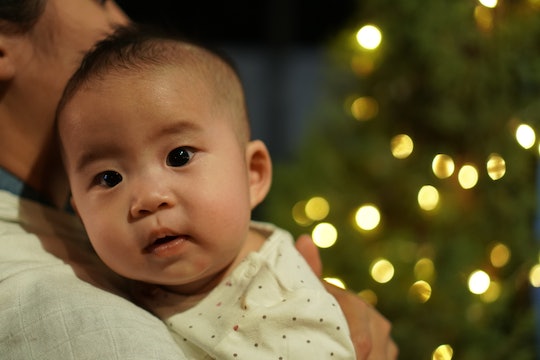 This may not be the best news for exhausted parents, but if you've ever worried about the importance of being cheerful with your baby, science seems to be officially onboard about displaying a positive, accepting attitude with your little one. A new study suggests that babies as young as 6 months understand angry tones of voice, and now you know you've really got to chill.

As Reuters reported, the science journal PLoS ONE has come out with a new study, based out of the University of Manchester in England.

In the new study, scientists aimed to establish a link between tone of voice and the part of the brain related to interpreting the emotional nature of vocalization, Reuters explained, adding the brain will begin basically looking out for an "angry" tone as early as 6 months of age.

According to the website Science Daily, researchers found that even infants were sensitive to tone of voice, just as an adult would process and interpret someone's tone in speaking to them.

As Reuters noted, the study followed 29 mother-child duos during playtime. The study’s head writer, Dr. Chen Zhao, noted the type of parents whose interaction was affected were practicing "directive" parenting.

"By 'directive,' we mean it in a very specific sense, that is, the extent to which a parent tends to behave and/or comment in ways that control or restrict their baby’s involvement in play or communication," Dr. Zhao told Reuters in an email.

Researchers found that both angry and happy vocalizations activated the fronto-cortical network of the babies' brains, according to EurekAlert!.

The site added that the brain experienced greater activation when exposed to anger when the mom in question took a more directive approach to spending time with their baby.

"Brain science shows that babies' brains are sensitive to different emotional tones they hear in voices. Such tones can cause different activation patterns in the infant's brain areas which are also known to be involved in processing voices in adults and older children," Zhao said, per Science Daily. "These patterns also reveal that the early care experienced by babies can influence brain responses so that the more intrusive and demanding their mother, the stronger the brain response of these 6-month-olds is to hearing angry voices."

And while most parents already know that even young children are sensitive to their caregivers, there seems to be more developments all the time connecting early childhood and parents' attitudes and emotions.

A University of Washington study from a couple years back showed, for example, that toddlers can control their behavior to avoid making the adults in their lives angry.

These kinds of studies have the potential to make parents feel as though they have to do things a certain way or that they're messing up when they may not be. There's no need to completely change everything based on results from a few small studies.

Still, this stuff is fascinating, and if anything, it just reminds you that while being a new mom can sometimes feel like the hardest, most beautiful job on earth, young babies are sensitive to all the adjustments taking place around the house, too.

More Like This
Why Does My Baby Call Everyone Mama?
Should Parents Consider Delaying Covid Vaccines Until Closer To School Starting?
The Covid Vaccine For Kids Under 5 Has Been Sent To The FDA For Review
How To Properly Clean An Inflatable Pool