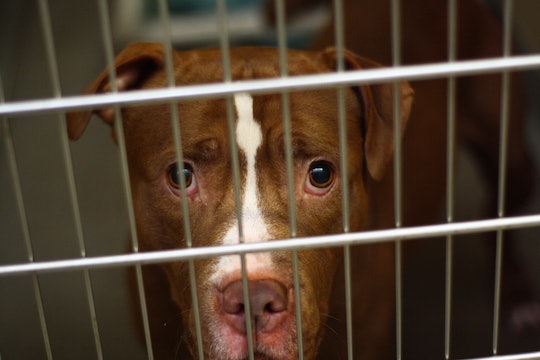 After a tragic incident over the weekend in which a 7-year-old Massachusetts boy was reportedly killed by pit bulls, many parents are wondering how to keep kids safe from dog attacks. For some in the media and at home, the easiest solution each time a pit bull attack makes the news is simply to blame the breed, and to call for forced sterilization or for banning pit bulls as pets altogether. Already, over 700 cities in the United States have enacted breed-specific regulations, according to the American Society for the Prevention of Cruelty to Animals. But banning pit bulls won't keep kids safe — here's what will.

It's time to recognize that dog attacks can come from any kind of breed. Proponents of banning pit bulls argue that the dogs were specifically bred to be dangerous, but many experts say that such stereotypes are harmful and incorrect. Board-certified veterinary behaviorist Dr. Ilana Reisner told Romper that she firmly believes the frequency of pit bull bites has more to do with these kinds of dogs often getting "the short end of the stick in communities with poverty, lack of vet care and training" rather than anything inherent.

Recently in Idaho, an infant was mauled by a dachshund, according to KTVB, which certainly doesn't fit the stereotype of a big, vicious pit. And a study from the dog data gathering website Dognition found that chihuahuas were more likely to get aggressive than pit bulls. Meanwhile, the American Temperament Test Society found last year that American Pit Bull Terriers "were among the most tolerant breeds," as The Atlantic reported.

So much of dog safety comes from both how a dog is raised and trained, and how you are treating it. For parents who are worried about their children getting attacked, prevention begins at home. Here's where to start.

It's easy to assume that the sweet, fluffy pet you've had for years would never, ever harm your little ones. But even gentle dogs can be provoked when kids have yet to learn boundaries. Reisner told Romper that, in the cases she's seen in which very young children are bitten by the family dog, "parents assume the dog will tolerate kissing, hugging and close face to face contact, so they are lax in their supervision." She continued:

The dog can be very “friendly” with children but still bite if disturbed while sleeping/resting, or when hugged or kissed. The dog is often lying still, and the child often starts the interaction.

It turns out that "let sleeping dogs lie" is more than just a proverb. It should be taken very literally.

Love for a dog can often blind parents to ignore warning signs. In a New York Times Motherlode article, Hope Reeves wrote about how her young son Otto was attacked by Zeke, the dog she had given away to her father after her children were born. Her familiarity with Zeke led her to assume everything was fine, she said, writing:

When I visited Dad a few years later with both kids in tow, it didn’t occur to me I was putting them in harm’s way. I let Otto chase Zeke around the house, grab his fur and sit on him when the dog clearly wanted to be left alone.

Many dogs will tell humans when they do not want to be touched, or when they are feeling uncomfortable and fearful. Teach children to notice when a dog is baring its teeth, growling, or snapping at the air, and to take the hint.

Bite prevention non-profit Doggone Safe has some great visual demonstrations of the differences in dog body language when pups are excited to play and interact versus when they just want to be left alone.

Learn The Proper Way To Pet

Many kids see a new dog, and want immediately to run up and start petting it. It's hard to tell your children that no, they shouldn't just go love up on every cute pup in sight, but it's a necessary conversation to have. Even the cutest of dogs can get aggressive around strangers. So teach your children that they should always ask before petting a stranger's dog, and that they should absolutely not approach unattended dogs, whether that dog is tied up outside a store, or fenced in a stranger's yard.

If children have gotten the go-ahead to pet, you should demonstrate that the proper way to do it is not to get grabby or rough, but to pet gently with an open hand. Via dog behaviorist Beverly Ulbrich, Rover has more in-depth tips on how to pet dogs without making them nervous or provoking them.

Teach Children Not To Take Things From Dogs

One of the most high-profile dog attack cases in recent years was that of Mickey, a dog who mauled a young boy in Phoenix, Arizona, according to azcentral.com. Reportedly, the attack started after the child took Mickey's bone away. Children might not think anything of grabbing a bone or toy away from a dog — they might even think it's a way to initiate some fun fetch play. But dogs don't always see it that way, so it's important to teach children to be careful about what they are taking away from dogs and how they do so.

If a dog does start to act aggressively, it's best to "be a tree." As Doggone Safe recommends:

Trees are boring to dogs and the dog will soon go away and leave you alone. Even if you are scared, it is important to stand very still and look at your feet. Never run from a dog!

While it might be tempting to blame the breed, parents and children need to take responsibility for practicing safe habits to stay safe and prevent dog attacks.

Pit bulls often get a bad rap in the media and carry an unfair stereotype along with them, but adding to that stigma won't keep kids any safer from a dog attack, of any breed. The ASPCA's position statement on pit bulls, which should be read in full, suggests that "all dogs, including pit bulls, are individuals," adding:

Treating them as such, providing them with the care, training and supervision they require, and judging them by their actions and not by their DNA or their physical appearance is the best way to ensure that dogs and people can continue to share safe and happy lives together.

Indeed, the idea of banning pit bulls is problematic and it won't keep kids any safer. Each incident is unique and a lot has to do with how the dog in question was raised and was treated at the time of the attack. Giving dogs proper training and teaching kids to respect their canine friends are ways to help prevent tragedies like these from happening again.

More Like This
'Squid Game' Is Coming Back For Season 2 On Netflix: Here’s What Parents Need To Know
Obamas Issue Powerful Statements After Supreme Court Ends Roe v. Wade
Viral TikTok Breaks Down How Beautifully Bluey Depicts One Character’s Infertility
This Map Illustrates Just How Many States Would Ban Abortion If Roe V. Wade Is Overturned