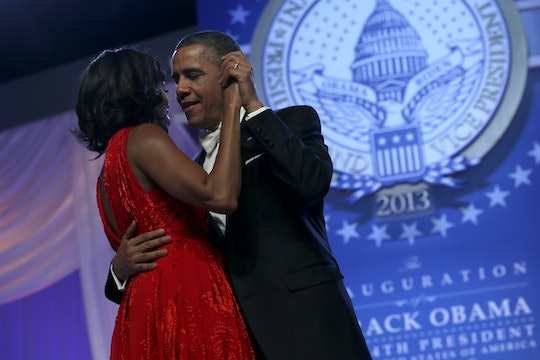 Sometimes a person says something so true and simple and right and real you feel it deep down in your bones. And frequently the person saying these things is Barack Obama. I don't think you have to agree with every word that comes out of his mouth, of course, but I think most people would be able to agree that he has a way with words. Especially when he's talking about one of his favorite topics: his wife Michelle. During a recent event in Oakland, California, Barack Obama referred to himself as "Michelle's husband" not simply because he actually is her husband, but also to make a point about masculinity.

As reported by Popsugar, the former president joined Golden State Warrior Stephen Curry at an event to celebrate the fifth anniversary of the non-profit organization My Brother's Keeper Alliance, which is funded in part by the Obama Foundation. The organization is focused on working with young men of color towards a better future by offering more opportunities and improved outcomes. And as was the case on Tuesday, sometimes these young men are lucky enough to hear a little wisdom and perspective from Barack Obama himself on what it means to be a man. His words were a powerful thing.

Obama started off the youth mentoring event by introducing himself as Michelle's husband instead of listing all of his massive accomplishments. He also introduced Curry as "Ayesha's husband," according to TIME, and I don't believe he did this to get a big pat on the back or any kudos for being a feminist. The theme of his discussion with these young men was all about how society defines masculinity. About old stereotypes that actually hold men down instead of encouraging them to rise up. Including the way men relate to women. As per The Independent, Obama explained:

If you are really confident about your sexuality, you don't have to have eight women around you twerking. I mean, why do you all gotta be... you seem stressed that you've got to be acting that way. Because I've got one woman who I'm very happy with. And she's a strong woman.

Obama continued in the same vein, explaining that because of the historically racist message from society that black men are "weak" and “less than,” they feel pressured to make up for this perception.

We feel like we've got to compensate by exaggerating certain stereotypical ways that men are supposed to act. And that's a trap that we fall into that we have to pull out of. If you're confident about your strength, you don't need to show me by putting someone down. Show me how strong you are that you can lift somebody up.

This lesson from Barack Obama was a meaningful one for these young men. Not only did he show them that it was okay to fight tired stereotypes and avoid the trap of exaggerated masculinity, he also showed them that being in a true partnership with a woman is an admirable trait. Something to be held up as an example of what you should strive for in life.

Because let's face it; Barack Obama's love for his wife is one of the best things about him. And that's saying a lot.