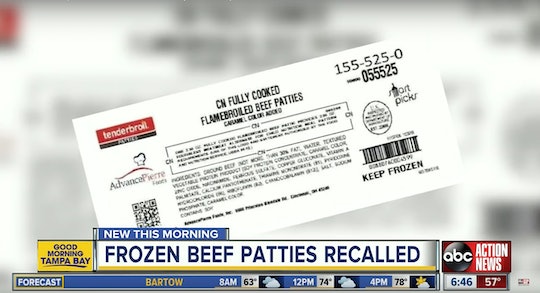 It seems like 2019 is quickly becoming the year of the recall. From cereals to chicken nuggets and avocados, there seems to be no limit to what products will be recalled next. And, it's enough to make any consumer second-guess their food choices. Now, it's hit an all-time kid-friendly favorite — burgers. And this one is a biggie, not only because of the quantity, but because of the people that it may impact. This beef patty recall could affect some U.S. schools, so you might want to check what's on the lunch menu.

AdvancePierre Foods, Inc, which is owned by Tyson Inc., is recalling 20,373 pounds of ready-to-eat beef patties due to the possibility of purple plastic pieces embedded in the meat, as announced on Tuesday by the Department of Agriculture’s Food Safety and Inspection Service.

The problem was brought to the company's attention after two separate complaints were filed about plastic found in the patties, according to ABC's Omaha affiliate, KETV.

This recall is classified as a class II, according to the USDA, meaning, "this is a health hazard situation where there is a remote probability of adverse health consequences from the use of the product."

The patties in question are marked "CN FULLY COOKED FLAMEBROILED BEEF PATTIES CARAMEL COLOR ADDED" and include case code 155-525-0 and package code 8334, according to The Street. They were packed in 14.06-lb cases containing three bags with 30 patties each and were produced on Nov. 30, 2018.

As of posting, there have been no confirmed reports of illness or injury linked to the recall, according to The Street.

The products in question were not distributed to retail stores but rather sent to distribution centers in Arizona, Florida, Illinois, Indiana, Michigan, Minnesota, Missouri, North Dakota, Nebraska, New York, Ohio, Pennsylvania, Texas, and Wisconsin, according to the company's statement.

The biggest concern is that many of these patties were sent to schools within the states listed above. And while they are not part of the food provided by the USDA for the National School Lunch Program, they may have made their way to other schools whose food service company might have purchased the meat, according to the Miami Herald.

But an AdvancePierre spokesperson says that the risk is potentially low.

"Not all the affected products were sent to schools. We know that some went to schools, but the rest was sold into commercial food services, or food services brokers that potentially sold to restaurants or other food service customers," Worth Sparkman, PR spokesperson for AdvancePierre Foods said in a phone statement to Romper.

It's possible that some of these recalled patties may still be in frozen storage at food service facilities, according to a statement from the USDA. They are urging facilities not to serve the patties, but rather throw them out or return them.

Consumers with questions or concerns are urged to call Advance Pierre’s Consumer Affairs Hotline at (855) 382-3101. Customer service representatives will be available Monday through Friday 7 a.m. – 6 p.m. CST. You can read the company's statement online.

Until this whole food recall is cleared up, you might want to think about packing your kids' school lunches. Sure it's a little extra work, but better than your tots potentially receiving a side of plastic with their burgers.

More Like This
6 Takeaways From The White House’s First-Ever Parents Press Conference
5-Year-Old Boy Died In Hot Car As His Family Prepared For Sister's Birthday Party
Can You Light Fireworks In Your Backyard?
This Map Illustrates Just How Many States Would Ban Abortion If Roe V. Wade Is Overturned