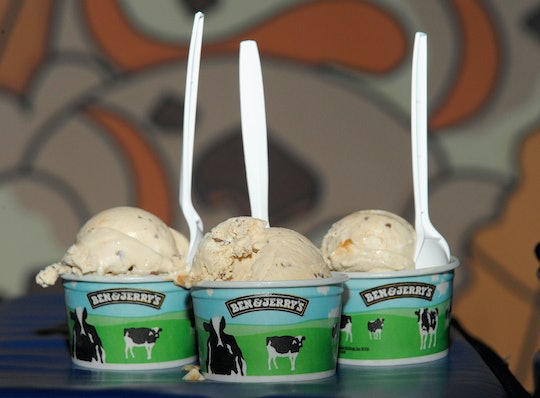 Ben & Jerry's Free Cone Day Is Back, So Ready Your Tastebuds

Some days, it just seems like the world is on your side, doesn't it? I mean, the weather is warming up in most of the country, the news is, well, the news, and a big holiday is coming up. No, not Easter, Passover, Earth Day, or any of those other holidays, silly. Ben & Jerry's Free Cone Day is coming, so ready your tastebuds.

As People reported, April 9, 2019 is Free Cone Day at beloved ice cream chain Ben & Jerry's. And as per tradition, the treat store will be offering its creamy offerings starting at noon at franchises across the country, all the way until 8 p.m. The price tag for you, if you don't mind a bit of a wait? Absolutely nothing! Why is anyone waffling? Put this on your calendar immediately.

According to the Ben & Jerry's website, the holiday is a way to make customers feel appreciated. When it started in 1979, Free Cone Day was a way for the little startup to express appreciation for a full year in business... in a converted gas station in Burlington, Vermont.

The site noted that founders Ben and Jerry had begun the previous year with only a $5 ice-cream making correspondence course under their belts and a $12,000 piggy bank, some of which was borrowed.

The ice-cream innovators' attempt to change the world (well, come on, you think Chunky Monkey's not up there with the telescope?) kept rolling forward over time, with the owners taking pints to small shops in their Volkswagen.

Eventually, though, the company's store in Saratoga Springs, New York became the first place outside of Vermont to celebrate Free Cone Day, thw website noted, adding that in 1993, every shop in the States got in on the sweet action, with Canada following suit. By 1998, the tradition hit the UK, with world domination (free ice-cream cone-wise, that is ) coming in 2000, the company's site added.

The site concluded that some one million scoops are now given out around the world. But if all the sugar and international generosity aren't quite enough for you personally, Food & Wine reports that Ben & Jerry's corporate has no problem with you getting your free scoop, then finding the next franchise and getting back in line for another free scoop.

Got that? You are practically being begged to binge!

Plus, you have all day to ponder whether you'll be in the mood come tomorrow for Strawberry Cheesecake, Chocolate Fudge Brownie, or an old fave such as Cherry Garcia. The flavor is all up to you.

Me, I'm in for all of it. Not a single flavor or description sounds bad to me right now, so I'll see you in line.