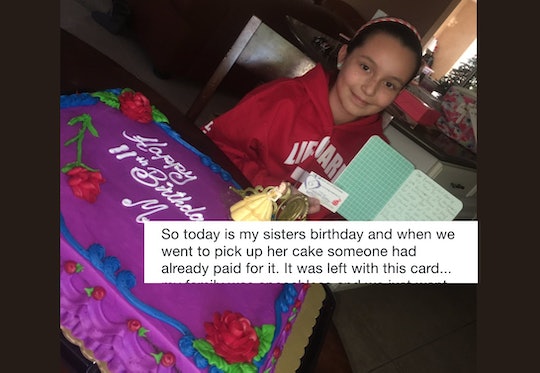 With all of the terrible headlines that have reached my eyes this past year, I confess I'm not all that sorry to bid farewell to 2017. Reading about attacks on women, people of color, Muslims, and transgender people — as well as the mass shootings, acts of terror, bullying, and more have turned me into a pretty cynical person. Every once in a while, though, a stranger's kindness restores my faith in humanity. And this bereaved mom's random act of kindness honors her baby's birthday in a perfect way.

On Dec. 27, a Twitter user named Kyle Jauregui shared an experience his family won't ever forget — and it's bound to leave you ugly crying. The Mirror reports that Jauregui recently went to pick up his younger sister, Madison's, birthday cake, only to discover it had already been paid for by a stranger. "So today is my sisters birthday and when we went to pick up her cake someone had already paid for it," Jauregui tweeted, along with a collage of photos. "It was left with this card... my family was speechless and we just want to say thank you to McKenna's mom and wish McKenna a Happy Birthday. There's still good in this world."

Twitter was understandably choked up by this kind gesture.

If you're having a difficult time reading the text on the birthday card, it says:

In honour of my daughter's 10th birthday I have chosen your birthday cake to pay for. Each year I do this random act of kindness because I am unable to buy my daughter a cake of her own. Today is her big double digit birthday. Please enjoy your day.

It's heartbreaking, right? But after you hear the circumstances surrounding "McKenna's mum"'s daughter's death, it's even more devastating. Scary Mommy reports the cake had been paid for by a woman named Ashley, whose 9-month-old baby, McKenna, died after a TV fell and crushed her. “She was here and mattered,” Ashley told Scary Mommy. “Knowing someone reads her name and learns about her means so much.”

Another Twitter user — someone who is actually acquainted with Ashley in real life — chimed into the conversation to offer her perspective, as well. "I know McKenna's mom personally and want to say that yes, there is SO much good, so much love, in this world. By sharing this, you have also sent so much of that love out into not only the world but the entire Universe! Happy Birthday Madison!"

As for the little business card that was also included? It's from the MISS Foundation — a kindness project that was started back in 1996 as a way for families to honor loved ones who had died, according to the foundation's website. (The MISS Foundation also offers support and other services for bereaved families.) So far, more than 2 million cards have been used to carry out these random acts of kindness in memory of family members who have died, according to the website. And it seems Kyle Jauregui's tweet is helping to raise even more awareness for the foundation. "We support families who have lost a child at any age from any cause," one Twitter user responded to a question in the tweet's comments. "There are online support forums and support groups all around world. They can hook your family up with a Hope Mentor if you need."

Yet another Twitter user shared one way she used a MISS Foundation card in honor of her mother. (I had no idea this was a thing!)

I can't begin to imagine the pain of losing a child. Maybe that's why it's so remarkable to me that Ashley continues to keep her baby girl's memory alive through these acts of kindness, despite her devastating loss. As Ashley said, "She was here and she mattered." And thanks to McKenna's loving and dedicated mama, her little girl's life continues to make a difference in this world long after she took her last breath.