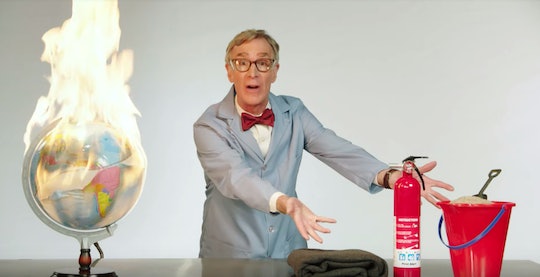 I don't know about you, but I have many fond memories of watching Bill Nye the Science Guy in elementary and middle school. Come on, you know the song. "Bill Nye, the Science Guy. Bill, Bill, Bill, Bill!" He taught us about the phases of matter, about outer space, and about volcanos — in that wacky yet mesmerizing way that only he could. If you're a millennial, then you know exactly what I'm talking about. Which is exactly why Bill Nye dropping F-bombs while explaining the climate change crisis is a must-see.

As The Guardian reported, the beloved pro-science/global warming activist appeared in a jolting segment of HBO's “Last Week Tonight with John Oliver” on Sunday. And he definitely wasn't messing around. While standing next to globe, Bill Nye addressed viewers with a decidedly different tone. “By the end of this century, if emissions keep rising, the average temperature on Earth could go up another four to eight degrees,” Nye said while sporting his signature lab coat and safety goggles. "What I’m saying is the planet’s on f*cking fire." Nye then proceeds to ignite the globe using a blowtorch.

“There are a lot of things we could do to put it out,” he continued, nodding to a blanket, a fire extinguisher, and a bucket of sand. “Are any of them free? No, of course not. Nothing’s free, you idiots."

But the mic-drop moment is right here:

Grow the f*ck up. You’re not children anymore. I didn’t mind explaining photosynthesis to you when you were 12. But you’re adults now, and this is an actual crisis, got it?

Another Twitter user wrote, "We f*cked up so much that bill nye is about to beat our as*es if we don't start to take climate change serious."

Yet another person tweeted, "Bill Nye may kill all of us before climate change ever gets a chance."

Meanwhile, Mayor of New York City Bill de Blasio tweeted, "I try not to use profanity on social media, but @BillNye & @iamjohnoliver are 100% right about climate change. Every. Single. Word. It's time for adults to quit pretending climate change isn't happening. It's happening. Our kids' lives are on the line."

As The Washington Post reported, Nye seems to be endorsing legislation proposed by Alexandria Ocasio-Cortez — the Green New Deal — and telling lawmakers they need to do something already. Furthermore, his message calls out individuals who have criticized the Green New Deal as expensive while making a valid point about why carbon pricing is a plausible move. “When something costs more, people buy less of it," Nye explained. "Safety glasses off. That’s it." (If you're dying for more of Bill Nye's take on climate change, he actually spoke with MSNBC News on Monday, May 14.)