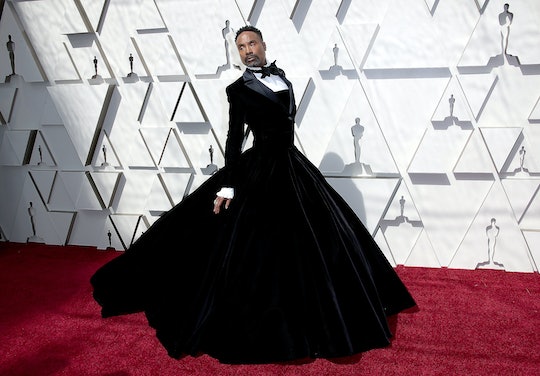 "An iconic day with an iconic person," Sesame Street wrote late last week in a tweet thanking the actor for visiting. Although many of the details behind Porter's appearance on the popular children's show remain under wraps, it seems there may be a Porter-Elmo team up in the works.

In teasing Porter's visit, Sesame Street shared a series of photographs of the actor on set, including one that featured Porter posing for a selfie with a tuxedo-clad Elmo. Porter later confirmed his meeting with Elmo in a tweet thanking to long-running children's program for having him. "Y’all, talk about iconic," Porter tweeted in response to Sesame Street. "I was tickled to meet @elmo and the gang at @sesamestreet!"

News of Porter's upcoming appearance was largely greeted with support and praise across various social media channels. "Thank you, Billy Porter," one user commented on Facebook. "If I had seen someone like you on TV when I was that age, coming out would have been so much easier and happier. Thank you to Sesame Street for always putting children's development and safety at the forefront."

Another Facebook user pushed back on those who might argue that Sesame Street should refrain from making statements and just "let kids be kids" by noting that her own male toddler liked to play dress up, try on her shoes, paint his nails with his sister, and "wear exactly what makes him feel happy and confident and like he can take over the world."

"Kids are EXACTLY this," she said.

On Twitter, the educational department of a Pittsburg public television station applauded the news. "We are so excited about this reveal!" WQED Education Department tweeted in response to Sesame Street's teaser. "THE CATEGORY IS........ LEARNING REALNESS!!!! Serve us allllll the lewks and alllllll the lessons! Smarter, stronger, kinder!"

While many have cheered the news of Porter's Sesame Street appearance, some conservatives have reacted with outrage. A petition demanding Sesame Street pull the upcoming episode before it airs inaccurately accused the children's show of trying "to sexualize children using drag queens" and of pushing "drag queens" on children. (Porter previously told Vogue that his Oscar look was "not drag" and he is "not a drag queen" — "I'm a man in a dress," he told magazine.)

Neither Porter nor Sesame Street have responded to the criticisms.

Although it remains unclear when Porter's episode will air, Sesame Street seems to have been just as starstruck in Porter's presence as so many of us would have been. "[Billy Porter] bringing those fierce vibes to Sesame Street for #Season51," the show wrote on Instagram when sharing a snap of a regal-looking Porter on the stoop outside of 123 Sesame Street.