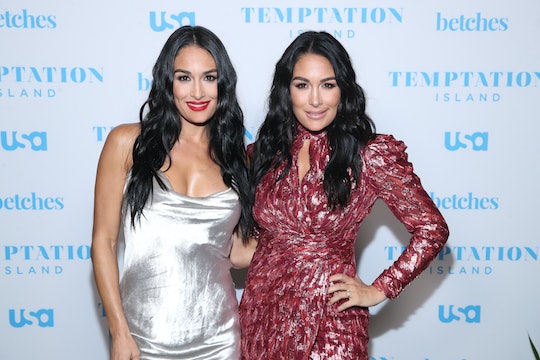 Most people were shocked to find out the stars of E!'s Total Bellas are both currently expecting, and it turns out Brie and Nikki Bella's reactions to their pregnancy news were pretty much the same. Well, perhaps they used a few more curse words...

During an episode of their podcast, The Bellas Podcast, both Brie and Nikki shared their personal reactions to when they found out they're pregnant. Brie, who is currently expecting her second child with her husband, professional wrestler Daniel Bryan, shared that she thought she wouldn't be able to get pregnant again. "I literally just, at the beginning of the summer, I just told Bryan, 'I think we're meant to have one kid,'" she said. "But you know, you get into those moments where sex is so good, everything is magical, and you think, 'Why the hell not, there is no way it could happen tonight.' And then it did."

Nikki, on the other hand, was in a yoga class two days later and "couldn't stop thinking about taking a pregnancy test," which prompted her to take one as soon as she got home. "I go in the shower, because the test says it takes two and a half minutes," she explained. "And when I got out of the shower and I saw the two lines that said I was pregnant, I think I said actually 'Oh f*ck.'"

When Nikki, who is expecting her first child with her fiancé, Dancing With The Stars professional dancer, Artem Chigvintsev shared the news with her sister, she was equally as surprised. "Everyone use safe sex if you don't want babies because if you don't, you and your sister are gonna be pregnant," Brie jokingly warned listeners.

The sisters are due just two weeks apart from one another and experienced similar symptoms during their first trimester. Brie said on the podcast that she is keeping her baby's sex a surprise until she gives birth, and revealed that she is due on July 27. As for Nikki, she said she's due on Aug. 6 and will find out the sex ahead of time.

Thankfully, both Nikki and Brie's emotional reactions to their pregnancy news were caught on camera for this upcoming season of Total Bellas, which premieres on E! on Thursday, April 9.