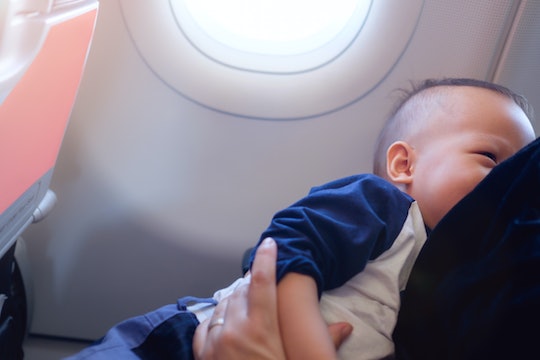 In what seems like a story making headlines every week these days, another mom has reported being shamed in a public setting. Past reports have included the park, a mall, and a school — but this time, it was during on an airplane. A British mom was told to stop breastfeeding on a flight, and it is infuriating to hear about.

The mom in question was Rachel Duffy, a woman from Yorkshire, England, according to a USA Today. Duffy claims that she was told to stop breastfeeding her 7 month old baby on a Ryanair flight from Portugal to England. The family, which included Duffy's 14-year-old son, Nathan, was returning home from vacation, according to a report by the Independent.

"The air steward came over and told me that I couldn't feed my son. ... The steward stood and watched while I struggled to sit my baby up — who started to cry — and continued to stand there until I had redressed myself," Duffy recalled to the British publication, noting that she had only sought to alleviate potential ear discomfort for her child, which can happen during takeoff and landing and which can be helped along by a feeding.

Unfortunately, the situation only worsened later in the flight when Duffy once again attempted to keep her son in good spirits during landing. “I was really shocked, angry and embarrassed by the situation — I continued to breastfeed during the rest of the flight, but I was told to stop again before landing,” she noted.

As England's Metro UK newspaper added, the mom found the incident so upsetting that she has zero plans to fly on the airline again. And who could blame her?

The airline company in question claims that it doesn't have a policy to deter breastfeeding. "Breastfeeding mothers are very welcome onboard our flights," a Ryanair spokesperson said, according to the report.

Every time a breastfeeding mom gets shamed in public, it seems like it involves someone judging a mom when it wasn't the company's policy to do so... which is pretty upsetting. Last fall, another U.K. mom was told to stop breastfeeding on a flight from London to Spain on airline EasyJet, as reported by MSN. In that instance, mom of four Kelly Edgson-Payne approached the airline's customer service to clarify the policy and was told she would need to "be discreet," the website detailed.

Meanwhile, MSN added that EasyJet's policy as per its website, noted that, "We support breastfeeding mothers and you can feed your baby on board at any time."

As long as there are so many cultural disconnects between breastfeeding as a natural and necessary function and the sexualization of the female body, such instances will keep cropping up. (Take the 2017 incident in which a breastfeeding mom was told to stop at a museum, amid ancient and precious artwork depicting mothers and their feeding babies. Hysterical.)

Not to mention, any company with a great breastfeeding policy on paper needs to make sure their employees are properly trained on how to accommodate breastfeeding moms.

I remember everyone at the pediatrician's office saying "breast is best" when my baby was little and I was struggling with breastfeeding. Well if that's true, we ought to create better public policies that actually support parents in trying to give the "best" care for their offspring.

More Like This
Breastfeeding Twins: Everything You Need To Know
Here’s How A NICU Stay Can Affect Breastfeeding
Is It Safe to Take Ibuprofen While Breastfeeding?
Bindi Irwin's Daughter Grace Fell Asleep On A Hike & Went Into Full Queen Mode