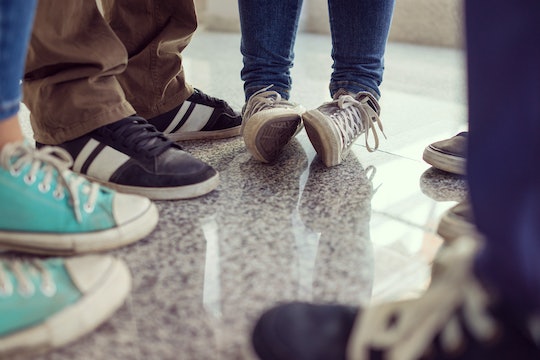 Skeptics of the body positivity movement often suggest that bodily acceptance, irregardless of shape or appearance, will ultimately result in increasingly negative health outcomes. This perspective is informed by multiple false ideas, chief among them that size and health are mutually exclusive, and that social pressure is motivating. However, a new study suggests that bullying kids about their weight could leave a long-term impact on their health, proving even more succinctly that shaming or teasing others for their appearances has absolutely no benefit or purpose.

There's no question that there are few places it is more difficult to be different from your peers than the playground. In early childhood, social acceptance is a high priority, and it is not until later in development that young adults start to want to stand out. Kids seem inclined to identify and then break into social groups based on these differences, and for many, the results can be really damaging.

A new study, conducted by the journal Pediatric Obesity, found that there was actually a correlation between being bullied or ostracized for one's weight, and gaining more weight as time goes on. This should prove, once and for all, that shaming or teasing kids is never a productive method for change of any kind.

According to U.S. Department of Health & Human Services, the study followed 110 children and pre-teens, who were an average of 11.8 years old and were either overweight or had parents who were overweight; researchers classified those children as being at higher risk for developing obesity later in life.

The researchers then followed these children for about a decade — on average, 8.5 years — and some as long as 15 years, to determine if and how their experiences with bullying would impact them long-term. What they found, according to the study, was that those who reported being teased for their weight gained 33 percent more body mass, on average, and 90 percent more fat per year, than their peers who were not teased or bullied.

Though the study does not posit what could potentially cause this, citing that it is "observational," for now, they do agree that "weight-based teasing [is] significantly linked with weight gain over time," as study author Natasha Schvey, assistant professor of medical and clinical psychology at the Uniformed Services University, explained to NPR of the study's findings, adding:

There's this school of thought that says [weight-based] teasing might have a motivating effect on youth... This study shows that that's not only not true but that teasing might increase weight gain over time.

It's a concept that goes hand-in-hand with those who believe that the body positivity movement could be damaging long-term. The idea here is that the more rigid and aggressively we shame people for their appearances, the more they will feel compelled to change.

Of course, this is entirely false, and it would only take a brief reflection on the past few decades of media and bodily representation to realize that, even when the most narrow concept of beauty is presented, it absolutely does not encourage those to follow suit. In the decades preceding the last five or so years, seeing anything other than an extremely thin, white, cisgendered man or women represented in mass media was an anomaly, while rates of obesity have seen such aggressive increase as to be called "alarmingly high," and perhaps not unrelated, eating disorders have done the same.

Though the study approaches the issue from the perspective of peers, it's just as essential to think of it as parents and caretakers, as well. Weight-based shaming is not only not helpful, it can be psychologically and physically damaging long-term, according to the American Psychological Association.

If that's not enough impetus to seriously reconsider the way we think, and speak, about bodies, it's hard to imagine what would be.

More Like This
The Covid Vaccine For Kids Under 5 Has Been Sent To The FDA For Review
Way Too Many Parents Have Zero Plans to Talk About Sex With Their Kids
Tick's Head Gets Stuck Under Your Skin When You Were Pulling It Out?
I'll Be First In Line To Vaccinate My Kids, But I'll Never Forget That We Were Last