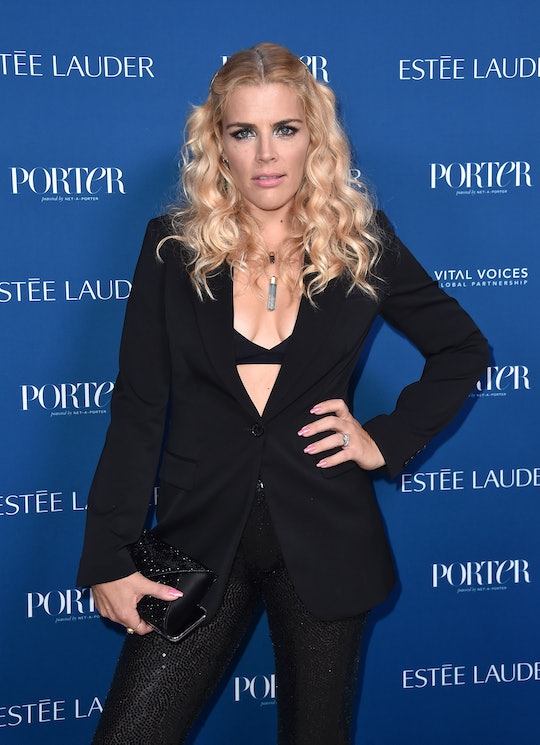 A person's loyalty to a certain NFL football team is often related to where they live, or it's based on where their favorite former college player ended up. But for one actress, her Super Bowl loyalty comes from a different source entirely. Because Busy Philipps' daughter is "100%" rooting for the 49ers — so she is too.

As the game kicked off between the San Fransisco 49ers and the Kansas City Chiefs on Feb. 2, Philips took to Instagram to share a photo of herself and her 6-year-old daughter Cricket both rocking Super Bowl LIV shirts. "My excitement about this Super Bowl breaks down to 95% about our @olay commercial and #makespaceforwomen, 3% halftime show, 1% dips, 1% SPORTS!" she captioned her post. "Cricket's excitement is legit 100% rooting for the 49ers, which we have NO IDEA why or where it came from but we support her interests!! 🏈🏈🏈 #makespaceforwomen."

Judging by the comments section, fellow parents could totally relate. One Instagram user wrote, "I’ve got a random Green Bay fan.... I think it’s the cheese head," alongside a shrugging emoji.

Another person commented, "I had the same unexplained niner fandom at her age too, but even more inexplicably because I lived in NY. My mom called and asked if I was still supporting my team today."

Yet another Instagram user declared, "Love this you're an amazing mom!"

In case you missed Olay's Super Bowl commercial, the ad featured Philipps, Lilly Singh, Taraji P. Henson, and Katie Couric — as well as retired astronaut Nicole Stott. It was inspired by the first all-female spacewalk that happened in October — and it urged viewers to use the #MakeSpaceForWomen on Twitter. For every tweet that uses the hashtag through Feb. 3, Olay will donate $1 (up to $500,000) to Girls Who Code.

So yeah. Between appearing in Olay's feminist ad and her supportive parenting, Busy Philipps definitely brought her A-game for Super Bowl 2020.