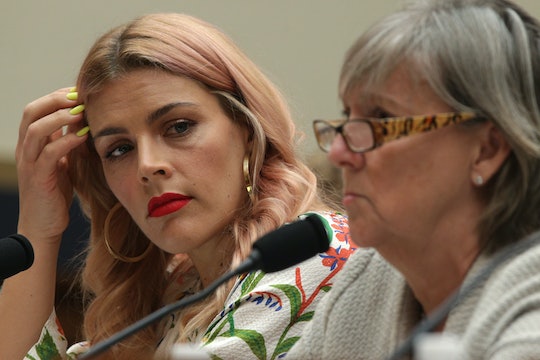 As many states continue to pass dangerous legislation restricting abortion rights, people from all aspects of life are speaking out against the draconian bans, including celebrities. Just yesterday, actress Busy Philipps testified about getting an abortion when she was 15 years old, stressing to lawmakers that deciding to get an abortion is not one that's taken lightly and it's not one that should be decided by politicians.

Philipps was one of eight women to speak in front of the House Judiciary committee regarding the current threat to abortion rights in America, according to CBS News. The 39-year-old actress and mother of two had previously cited the signing of Georgia's controversial and so-called "heartbeat" bill as her motivation for speaking out about her own experience back in May.

"The statistic is that 1 in 4 women will have an abortion before age 45," Philipps said on her E! late night talkshow, where she first revealed she had an abortion at 15, according to The New York Times. "That statistic sometimes surprises people. And maybe you're sitting there thinking, 'I don't know a woman who would have an abortion.' Well, you know me."

While testifying in front of Congress on Tuesday, Philipps revealed that she had an abortion as a teen when she was living in Arizona and a lot has changed in terms of abortion rights in the state since then. She testified that now minors in Arizona must get parental consent from at least one parent, go through a 24-hour waiting period, undergo an internally administered ultrasound, sit through mandatory counseling, and still provide the court with a reason why an abortion was wanted.

"If I were that 15-year-old girl in Arizona today, legally I would have to get parental consent," Philipps said in front of Congress. "I would be forced to undergo a medically unnecessary ultrasound, to go to a state-mandated in-person counseling, designed solely to shame me into changing my mind, then take a state-mandated 24-hour time out to make sure I really knew what I wanted. And finally, I would be forced to give the state a reason WHY."

"Well, here is mine: my body belongs to me, not the state. Women and their doctors are in the best position to make informed decisions about what is best for them. No one else," Philipps' impassioned testimony continued.

Right now, according to the Guttermacher Institute, 37 states require some form of parental consent before a minor can obtain an abortion. And if parental consent can't be obtained, not only is a "judicial bypass" necessary, but a judge has to deem if the minor is mature enough and they would have to attend state mandated counseling and sit through a cooling-off period, according to Advocates for Youth. And in some states, like Texas, a minor can't even get birth control without parental consent, according to Planned Parenthood.

Beyond the restrictions minors face, there have been sweeping changes to abortion rights in various states across the nation. For instance, Georgia, Alabama, Missouri, and Louisiana have all passed controversial anti-choice bills, and many of which would ban abortion services if a fetal heartbeat can be detected, which is usually at six weeks of gestation, according to Fortune, and before many know they're even pregnant.

Philipps continued in her testimony, "No bill that criminalizes abortion will stop anyone from making this incredibly personal decision. These bans will not stop abortion from happening. But they will drive women and girls into the shadows. Which is what this has always been about. Shaming and controlling women’s bodies."

Lawmakers in Nevada and Illinois, however, have moved in the opposite direction. Nevada and Illinois both repealed laws hindering women from obtaining access to abortions, along with improvements to other reproductive health care regulations, according to CNN.

So why is all of this happening? It's all about the conservative Conservative Supreme Court and the potential repeal of Roe v. Wade, a 1973 landmark court case that gave women the right to choose, according to Vox. Now, states are working to shore up legislation at the state level, before such a repeal can take place.

With so much at stake, Phillips has encouraged people to share their own stories, using the #YouKnowMe hashtag, according to Wired. Since then, thousands of women have obliged, in an attempt to crush the stigma of abortion.

"I have heard from hundreds of thousands with their own stories: women who were raped, women whose very wanted children had severe fetal anomalies, women who were in abusive relationships, women whose birth control failed or who simply weren’t ready," Philipps said in her testimony. "I also heard from women who had abortions before abortion was legal in 1973, putting themselves in dangerous circumstances."

She continued, "Abortion is health care, and should not be treated as different from any other health care."

Philipps concluded her moving testimony with a message to her daughters, Birdie and Cricket. "My dream for them is that they will live in a world in which women are truly equal, with complete control over their own reproductive health," she said. "That is the dream I have for all women, regardless of their privilege or parents or what state they live in."

Philipps' honesty and awareness hopefully brings light to an issue that desperately needs it.

More Like This
Here’s How To Fight For Abortion Rights
Keep Talking To Your Kids About Abortion — It's More Important Than Ever
Taraji P. Henson Says “Guns Have More Rights Than A Woman” At The 2022 BET Awards
Obamas Issue Powerful Statements After Supreme Court Ends Roe v. Wade