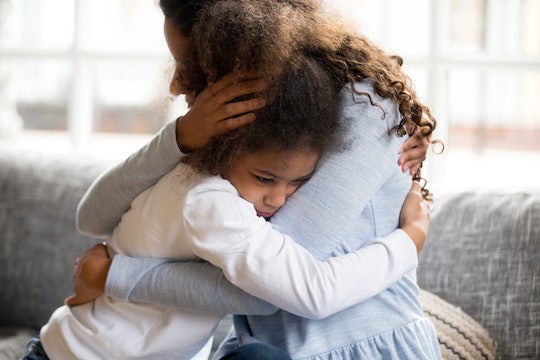 Most people think of a child’s life and imagine playing in the sandbox, romping in the cul-de-sac, and having sleepovers with friends. But for some kids, it’s not all rainbows and sunshine. Depression in kids can start as early as preschool age, and for a variety of reasons. Fortunately, there are treatment options for kiddos and their parents to consider.

Shanique Ampiah, M.D., board-certified child and adolescent psychiatrist with Baptist Behavioral Health in Jacksonville, Florida, tells Romper in an interview that most mental illness is diagnosed in the early to mid-20s, but signs can crop up in teens.

“In major depressive disorder, or MDD, the mean age of diagnosis for most people follows this trend, however it can certainly present much sooner. Studies indicate that the prevalence of depression in children and adolescents increases with age, with highest rates being seen in adolescents ages 12 to 17,” she says.

But really, there’s no limit to how early depression can strike.

“Depression can happen at any age,” says Dan Marullo, PhD, clinical psychologist at Children’s of Alabama, in an interview with Romper. “Typical presentation for us at the hospital is more in adolescence: kids 14 to 17 years of age. You do see a fair number of 9, 10, and 11-year-olds, but in my career, I’ve seen younger children and toddlers you might consider as experiencing some type of depression.”

“It’s all of the above,” says Marullo. “Some people are more predisposed to depression and anxiety disorders just because of their genetics. Certainly, life events can have a role to play, particularly if you are vulnerable due to genetic predisposition. With younger kids, those toddlers and preschoolers, disruption in the family, like parents going through a difficult time, major illness in the family, they may have a hard time coping with that. Anything affecting the child’s safety and security can predispose them toward depression.”

It’s important for parents to know that depression may look a little different for a child than it does for an adult. The main difference: they get annoyed and frustrated much more easily than usual.

“The hallmark difference in this population is irritability,” says Ampiah. “Patients with depression experience the same cardinal symptoms of depressed mood, anhedonia, low energy, insomnia or hypersomnia, increase or reduction in appetite, thoughts of worthlessness and guilt, concentration problems, and may also have suicidal thoughts. In children and adolescents, depression may present as irritability where just about everything seems to be annoying or gets on their nerves. In younger children, irritability may present as more frequent or severe temper tantrums, while in teens this may be displayed as poor frustration tolerance, angry outbursts, or hostility.”

Marullo agrees that irritability and a shorter fuse are signs of depression in children. There are others that differ from what you may notice in adults. And they can be deceptive.

“With younger kids, you’re more likely to see that kind of irritability, they’re more difficult to console, or clingier with parents in general. Sometimes kids get diagnosed with ADHD when it’s actually depression. It can look ADHD-ish in terms of the distractibility and impulsivity,” he says.

Just like depression in adults, depression in children can be treated successfully. Cognitive-behavioral therapy, or CBT, is one common approach. That’s usually where Ampiah starts with her own patients.

“As a child psychiatrist, I often begin with the use of evidence-based psychotherapy to treat depression. CBT has been found very effective and enduring for mild to moderate cases of depression. If warranted, medications can also be very helpful — there are several medications that have been approved by the FDA to use in young children.”

“There are modalities for treatment at any age,” Marullo says. “The research shows that a combination of psychotherapy and medication is a very powerful combination in treating depression. It really depends on what the issues are, but the younger the child, the more important caregivers are in therapy. You can’t ask a 3-year-old how they’re feeling, so it’s about helping the parents make some changes and do things with their child that are helpful. A lot of times therapists are going to use play and art techniques in addition to the standard CBT approaches, because that’s where children are."

But parents shouldn’t worry — families deal with difficult experiences from time to time, and not every child whose family has a rough patch gets depressed. Having a solid routine and loving family relationships are the best prevention. However, if you notice any behavioral changes that cause your kiddo or your family difficulty, it can only help to seek a doctor’s advice.

“When you work with younger children you get a better outcome; the sooner you identify and address a problem, the easier it is to treat. I like seeing my colleagues have younger kids in their office,” he says. “Young children can have clinical depression. I would encourage parents, if they’re concerned there’s an issue with their child, to look for any change in behavior that persists and causes them problems. That’s when you want to start seeking professional help. You probably want to start with your pediatrician. It would not be unusual for a small child to engage in some psychotherapy.”

More Like This
The Covid Vaccine For Kids Under 5 Has Been Sent To The FDA For Review
Should Parents Consider Delaying Covid Vaccines Until Closer To School Starting?
Way Too Many Parents Have Zero Plans to Talk About Sex With Their Kids
Tick's Head Gets Stuck Under Your Skin When You Were Pulling It Out?