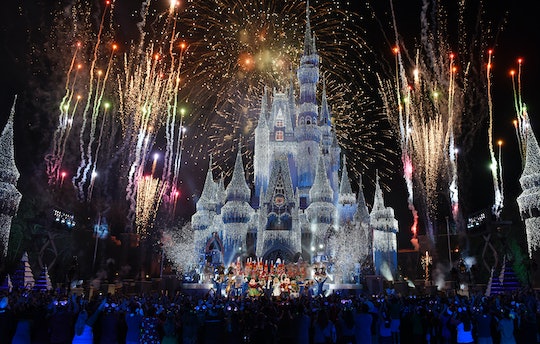 Disney Will Soon Enforce A New Stroller Rule, So Bust Out The Ol' Tape Measurer

If you're one of those parents who really just loves a nice big stroller and also visiting Disney World, I might have a little bit of bad news for you. The theme park is making some changes, and one of those changes will directly affect strollers. Now if you're worried about whether or not you can bring strollers to Disney World, rest easy. You're not going to be in a position where you have to carry your tired 3-year-old throughout the enormous theme park all day. But you are going to have to make sure your stroller is under a certain size after May 1.

Disney Parks announced in a blog post on Thursday that parents will have to start bringing slightly smaller strollers when they visit both Disney World and Disneyland. Until May 1, parents with strollers up to a width of 36 inches across will still be able to bring those into the park. But afterwards, according to the announcement, the strollers will have to be a maximum width of 31 inches.

This decision was apparently based on trying to reduce the amount of congestion people have to face when visiting the park, because those extra-wide strollers might be comfortable for the kids but they're a bit clunky for everyone else waiting in line-ups.

Now for those parents who have two little ones and need a double stroller for their visit to Disney World, this width requirement is actually still pretty generous.

There are plenty of double jogging strollers, like the ones that made this top 10 list from Snug Baby, that are under 31 inches wide. And they still have loads of storage space underneath plus cup holders because let's be honest, both of those things are just as important as the stroller's napping capabilities for your little one.

While it wouldn't be the worst idea in the world to actually measure your stroller before hauling it all the way to Disney World, as a general rule of thumb, Home Guides notes that most doorways are under 36 inches wide. Which means if your stroller fits smoothly through a door, you should be good to go. And if you're not, you can actually rent a regular stroller or a double stroller at Disney World when you arrive for an average of $15 a day (or $31 a day for a double), according to Disney World's website.

It isn't just the oversized strollers getting banned at Disney World after May 1. Wagons will no longer be allowed in the park to cut down on congestion, the blog post announced. And smoking of any kind will no longer be allowed anywhere within Walt Disney World Resort either. Instead, there will be designated smoking areas just outside the park, as well as at Disney Springs and some other resort hotels, according to CBS News.

All of these changes are coming just in time for the big opening of the highly anticipated Star Wars Galaxy's Edge, an entire new land dedicated to all things Star Wars. So if you thought Disney World was busy before... I think it's going to be pretty wild this year. No wonder they're being proactive about space.

More Like This
Best U.S. Summer Travel Destinations For Families
'Hocus Pocus 2' Officially Has A Release Date To Look Forward To
Can States Ban The Abortion Pill? FDA Rules May Make That Hard
You Can Schedule Your Kid’s Covid Vaccine Appointment At Walmart