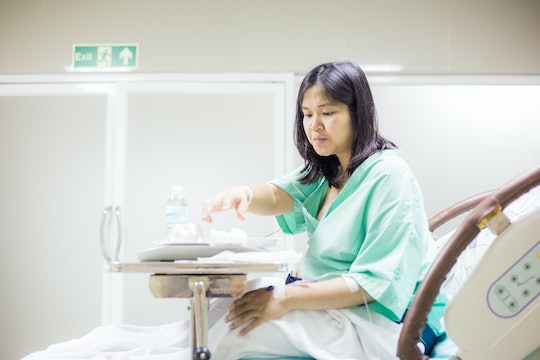 Can You Eat After Being Induced, Or Are You Stuck With Ice Chips?

Getting labor induction is a common enough procedure, but the process could leave you with some questions. For instance, can you eat after being induced, or is it better to go without food until after the baby's arrival? Not everyone is super jazzed about the idea of eating only ice chips for however long the delivery takes.

In most cases, people who are about to deliver a baby will not be given solid foods. "Generally women aren’t fed while on labor and delivery," Kecia Gaither, M.D. tells Romper. "If they are allowed to eat, it’s clear liquids." Other experts support this idea. In fact, "withholding food is still is a tradition in most hospitals and extends to care for women being induced," midwife Sharon L. Ryan CNM, DNP, tells Romper. "Most places will allow clear fluid or at minimum ice chips during an induction." For the most part, you can't expect to eat much substantial food after induction, even though the delivery process can take hours.

So why is food withheld for people who just had labor induced? "The rationale for such is one never knows when fetal distress will occur, necessitating an emergency Cesarean delivery," says Dr. Gaither. It's about keeping you safe if going under anesthesia becomes necessary. An emergency C-section "raises the risk of vomiting and aspiration of stomach contents (getting vomit down the breathing tube into the lungs)," explains Dr. Ryan, who also notes that this risk is low with current methods of anesthesia. In any case, the general policy is still to avoid eating after being induced.

That said, you don't have to go through the whole induction and labor process on an empty stomach. In fact, it's often best to get some food in your system beforehand. "Typically before going to the hospital for labor induction, it’s best to eat... the process is long," says Dr. Gaither. Eating a real meal before being induced is probably a great idea.

And in some cases, it may be OK to snack a bit before the active labor kicks in. "Withholding food during a long induction can cause the laboring woman discomfort and lead to fatigue and poor coping," says Dr. Ryan. "Eating lightly prior to active uncomfortable labor should not be contraindicated with most inductions." Dr. Ryan further recommends avoiding fatty or fried foods at this time, and instead choose easily digestible snacks such as yogurt, toast, or soup. In other words, maybe don't schedule any Uber Eats deliveries for this time, but remember that some light snacks may be OK. Whatever the case, once the baby arrives you'll be able to tuck into a (well-deserved) meal soon enough.

More Like This
This Is How Your Water Breaks During A C-Section
Can Swimming Induce Labor? Experts Weigh In
What You Need To Know About Eating Burrata During Pregnancy
Should You Bring Your Breast Pump To The Hospital? Here's The Deal