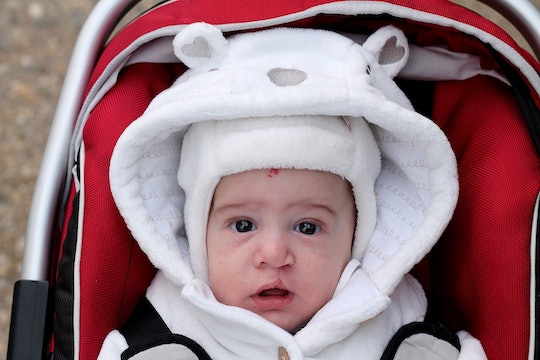 The possibility of cleft lip or cleft palate probably cross the minds of most expectant parents as they prepare to meet their baby. And while it's not likely, it isn't altogether unlikely, either: For every few thousand newborns, one or two is born with them. So, when will you find out if your baby is that one? Can cleft palate be detected on an ultrasound before your baby is even born?

Jeffrey Goldhagen M.D. is a board-certified pediatrician and medical director of the Snyder Family Cleft and Craniofacial Center at Wolfson Children’s Hospital of Jacksonville. He tells Romper that cleft lip is visible in utero, but cleft palate can be harder to detect until after birth when feeding issues arise.

“You generally cannot see a cleft palate on ultrasound; you can see a cleft lip on ultrasound,” says Goldhagen. “After birth, if there’s a cleft in the hard palate, that’s visible and routinely identified. If there’s a cleft of the soft palate, sometimes that’s difficult to identify. It can be just a cleft in the muscles so it’s difficult to see at times. Oftentimes those are identified due to difficulties feeding the child. It’s important for pediatricians to really do a thorough exam of the hard and soft palate to ensure those are not missed.”

However, if your doctor performs a 3D ultrasound to check on your baby’s teeth (well, future teeth, anyway), they can get a pretty good idea about their palate before birth.

“A cleft palate is visible during an ultrasound,” says OB-GYN Jessica Shepherd, M.D., adding that "3D ultrasound to evaluate fetal tooth germs is superior to 2D ultrasound with a detection rate of 88% to 94% versus 56% to 62%. If there are concerns on initial ultrasound of a cleft lip or palate, 3D ultrasound or MRI can be used to help refine the visibility and help diagnose."

Not all parents will be sent in for a 3D ultrasound. It’s usually recommended if your pregnancy is high risk, or your docs suspect a cleft palate may be developing.

“High-risk OBs may do a 3D ultrasound if they suspect a cleft palate, but they cannot be sure until the birth of the child,” says Lida Sarnecky, RN, program manager of the Snyder Family Cleft and Craniofacial Center at Wolfson Children’s Hospital of Jacksonville. “We do prenatal counseling in our clinic, and when I see that on a report, I generally note to the parents that they’re suspecting a cleft palate, but we won’t be sure until the baby is born," she tells Romper.

Once you hear a diagnosis, your first question will likely be, “How is it repaired?” Well, you’ll have some time after baby is born before they need anything major done to repair their lip or palate.

“Cleft lip repairs are typically performed between two and six months of age depending on the child's health status and cleft team protocols,” says Shepherd. “Cleft palate repairs are generally performed after cleft lip repair in a separate surgery when the child is between nine and 18 months of age, depending on health status.”

While those surgeries may seem like the most pressing concerns, Goldhagen says parents should know cleft lip and palate care requires a team of knowledgeable docs. Your little one may encounter some aftereffects in the years to come that they can help with. They can even help you before your baby is born — for example, recommending specific nipples that work well for newborns trying to eat with cleft palate.

“It’s very important that families get connected to a team as soon as possible, even at the first identification of the cleft on the ultrasound,” he says. “The standard of care now across the country is to be followed and cared for by a cleft and craniofacial team that includes a pediatrician, plastic surgeon, ENT, oral and maxillofacial surgeon, audiologist, speech pathologist, orthodontist, pediatric dentist, psychologist, and social workers. There are a host of other issues the child may experience, like dental issues and orthodontic issues. Almost all of these children will require ear tubes. Most will require speech therapy. That may mean that you need to travel, but this care requires a specialized team.”

Sarnecky says parents shouldn’t be alarmed by a cleft lip or palate diagnosis — it will be OK, and your pediatrician will know what to do.

“Normally when cleft lip is identified prenatally, the parents are referred to a team for prenatal counseling, and then we follow that patient until 21 years of age. If it’s not detected before birth, normally the NICU or nursery will contact our team to meet with the family and provide cleft education. A pediatrician will refer you to a team directly or to a plastic surgeon they know is part of a team. We always recommend if parents are going to do research, do research on a site that’s educationally based for parents, like the American Cleft Palate-Craniofacial Association. Early education can help ease some of the fears parents may have.”

More Like This
Can Babies Hear Fireworks In The Womb? Here's What Experts Say
22 Summer-Inspired Names For Your Totally Laid-Back Baby Boy
21 Roman Baby Boy Names With Ancient Appeal
The Zippiest Girl Names Start With Z