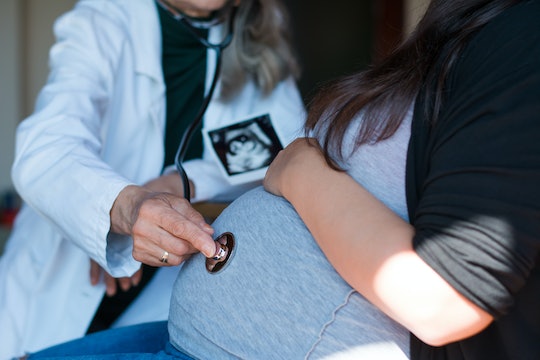 Can Your Mucus Plug Regenerate? Here's Why It's Actually No Biggie

Moms-to-be are often evaluating everything their body does during pregnancy, especially as they inch closer and closer to their due dates. Women are led to believe that a pre-cursor to labor is losing a large mass of discharge, called the mucus plug. But what if it's lost early? Can your mucus plug regenerate? The short answer is yes, but experts say that's not the question you should be asking.

Dr. Annelise Swigert, OB/GYN, tells Romper that a lot of misinformation has been spread about the mucus plug.

"The theory is that the mucus sits up in the cervix like a cork and when it comes out it's like opening a wine bottle," she says, when in actuality, "it's not associated with labor." Dr. Katie Rustici, OB/GYN, reiterates this, telling Romper "the mucus plug is truly not a 'thing.'" She continues: "There is naturally some cervical mucus that passes in the third trimester but it is variable and not tied to labor at all."

Both Dr. Rustici and Dr. Swigert say that women do experience more mucus/discharge during pregnancy, and it might come out in large clumps, but whether that happens in the second trimester or third is irrelevant. "During pregnancy, the body creates more vaginal discharge/mucus because the cells that line the vaginal wall are more active due to high hormone levels and more blood flow," Dr. Swigert says, adding that because the body is making mucus all the time, you could "lose your 'mucus plug' early, and then lose it again."

"Some women pass their 'plug' super early, likely 20-24 weeks, and go on to deliver at term," says Dr. Rustici. Dr. Swigert agrees, and adds that losing a mucus plug early has "never been associated with preterm labor."

So, essentially, yes, the mucus plug can regenerate, but it doesn't really matter either way. In fact, Dr. Swigert and Dr. Rustici both say that's not what a pregnant woman should be on the lookout for.

Some things that Dr. Rustici says should always prompt a call to your doctor include "decreased fetal movement, gush of vaginal fluid, or painful contractions." When it comes to any discharge, Dr. Swigert advises women to examine it a bit (even if it's not exactly pleasant). If it's watery, that could be a sign of your water breaking. If it's associated with burning or vaginal pain, smells funny, or is very yellow in color, it could be a sign of infection which needs to be evaluated by a doctor.

As with anything during pregnancy, if you're unsure or uneasy, it's always better to play it safe and call your physician. They might ask you to come in to be evaluated, or they might simply put your mind at ease (like, by assuring you that you aren't in preterm labor over a lost "mucus plug"). Either way, expect increased discharge during pregnancy, and don't be alarmed if you lose a "plug" (or two, or three) along the way.