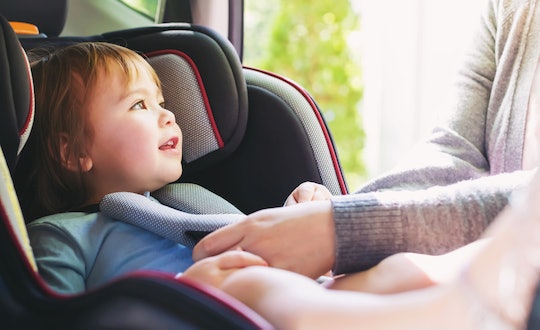 Pretty much all parents want their kids to be happy, healthy, and safe from the time they're babies into childhood and well beyond. But figuring out exactly how to make as sure as possible that that will be the case when kids are traveling in cars can be a big task for parents — and the worry starts waaaay before they get behind the wheel themselves as teenagers. So, for example, what are the best car seats to buy that also won't break the bank? And speaking of car seats, how long does a kid have to ride in one, anyhow? Luckily, a handy breakdown of car seat laws by state helps parents to learn best practices.

Before diving into car seat law, though, let's go over the American Academy of Pediatrics' (AAP) guidelines for child safety when it comes to cars. Because while car seat laws change depending on where you are in the United States, these recommendations for keeping little ones as far out of harm's way as possible don't. So, parents, take note: The AAP suggests that toddlers and babies should ride in rear-facing car seats until they are 2 years old or outgrow the seats, as that position is considered to be the safest. Then, little ones should use forward-facing car seats for as long as physically possible, and then graduate to booster seats until they are at least 4 feet, 9 inches tall. And, sorry kids, but the AAP advises against letting anyone younger than 13 sit up front.

So those are the recommendations, but what about the rules? First, there are eight states that enforce the safety measure that kids should stay in rear-facing car seats until they 1 or 2 years old. Those states are California, Connecticut, New Jersey, Oklahoma, Oregon, Pennsylvania, Rhode Island, and South Carolina, according to the Governors Highway Safety Association. As a result, the argument could be made that these states boast the "safest" car seat laws in the nation, at least by that metric.

Still, the laws are only truly safe if people are following them and law enforcement officials are enforcing them. So it stands to reason that the mere fact that a child's family lives in a state with laxer laws doesn't necessarily mean they have to adopt practices that make them less safe on the road. (That is, except in extreme cases. Autobytel notes that South Carolina law actually prohibits parents from keeping their kids in rear-facing seats after their first birthdays, for instance.)

In any case, it makes the most sense for parents to learn the laws in their states as well as the AAP recommendations and to work to abide by both to give their kids the safest travel experience possible. AAA has a handy state-by-state compilation of specific laws anywhere you may find yourself cruising in the United States and Puerto Rico. This indispensable resource will fill drivers in on laws like the one in Maryland that requires all kids under the age of 8 and shorter than than 4 feet, 9 inches tall to be "properly fastened and secured by a child restraint system." You'll also learn fun fact like if a kid has not yet turned on or still weight less than 20 pounds in Vermont he or she must travel in a rear-facing infant seat.

A lot of the states specific laws mirror one another pretty closely, but it's still a good idea to check out the law and get a game plan together both for 12-hour treks to visit Grandma and Grandpa as well as quick trips to the grocery (which can often feel like daylong car rides with a baby in tow.) Then, make the decisions that work best for your situation and family with safety laws, guidelines, and your child's safety top of mind. It's the cool thing to do — after all, Beyoncé has the car seat game on lock.