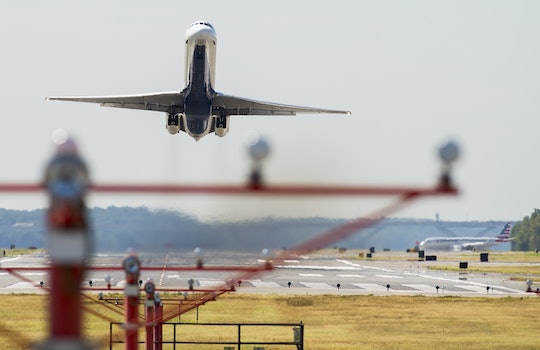 It's no surprise that flying with an infant or toddler is a complicated process. Many parents contemplating the particular circle of Hell that is airline travel with young ones may be focused on how to keep their children from screaming the whole time, but there's another important factor to consider. Knowing car seat requirements on airplanes is a necessity for parents when it comes to child safety.

Many parents who are already loaded down with way too many baby supplies may not even think to bring a car seat on a plane, preferring the ease of keeping an infant or toddler on their laps. But "The Car Seat Lady," Dr. Alisa Baer, recommends that parents bring a car seat despite the extra hassle, and as she is both a pediatrician and a certified instructor for the National Highway Traffic Safety Administration, she certainly knows her stuff.

Baer told Parenting that bringing a car seat on an airplane is "the safest approach," since turbulence, as well as other problems during takeoff and landing, could harm children who aren't secured by anything besides their parent's arms. And that's also the recommendation of the American Academy of Pediatrics, which notes that preventable injuries and deaths have occurred in cases of unsecured young children. Obviously, no parent wants to risk that. So, how does one even go about making sure that a car seat fits airplane requirements?

First of all, parents should check their car seat for an Federal Avaition Administration (FAA)-approved sticker. If the sticker may have rubbed off, the car seat instruction manual should also include a note about it. According to Baer, FAA approval means that the car seat passes an "inversion" test, and will hold a child even if it gets turned upside down. This can be a pretty big deal. In 2007, a toddler was the only survivor in a plane crash because she was strapped in a car seat that held her even when the plane flipped over.

Flights within the United States on any carrier and out of the United States on a U.S.-based carrier are required by law to allow children to use approved car seats, but there is a catch — you have to have purchased a ticket for that child. Since airlines tend to allow children under the age of 2 to be carried on a parent's lap for free, some parents may not want to pony up the extra charge for a car seat. But certain airlines, recognizing this problem, have begun to offer more affordable "Infant Fares." Southwest is one such airline. Parents can check on a case by case basis with other airlines while booking flights to see if they offer similar options.

Parents should also note that these car seat rules may not apply on flights out of the United States on a non-U.S.-based carrier. Baer told Romper that some international carriers don't allow car seats at all, while others have rules about whether or not car seats have to be forward-facing, or about a child's age and weight, and so on. Yes, it's complicated, so it's a good idea to check car seat policy on an airline's website while booking tickets.

Once parents have committed to bringing a car seat on a plane, and purchased a proper ticket, they should check to make sure that the car seat is the right size to fit in the airplane seat. As Baer told Parenting:

If you'd like to find out the dimensions of the seats on the airline you'll be flying to measure it against the dimensions of your car seat, you can call the airline directly, or use SeatGuru.com. And since airlines require that car seats not obstruct the exits of other passengers, car seats can only be put in window seats, or in the middle seat of a middle row. And they definitely can't be put in exit rows.

Baer told Romper that there's another very important reason that she recommends parents bring car seats on the airplane. It helps make sure that all car rides associated with the trip are as safe as possible. Parents who don't want to bring a car seat on the plane may end up taking a baby in a taxi without one. A checked car seat could get lost in the black hole that is baggage claim, leaving parents stuck on the other end of the trip. New car seats in a rental car could be difficult to figure out on not-so-many-hours of plane sleep.

To save money and stress, it can be helpful for parents to think about all this while they're contemplating buying a car seat in the first place. As Baer told Romper,

Before you buy a car seat, it can be a good idea to do some research about one that will do a great job for your car as well as for the more rare airplane trips you may be taking, rather than traveling with a seat that’s not as travel-friendly or spending extra money on a seat that’s just for travel.

If you'd really like to get into the nitty-gritty, here is an official advisory circular detailing the FAA's policies on child restraint systems. And Baer has a helpful list of airplane car seat tips on her website that can be a lifesaver for confused parents. It may be a pain in the butt to lug that car seat onto the plane and make sure you're doing everything correctly, but hey, a child's safety is worth it.

Correction: a previous version of this article stated that airlines were required to allow children to use approved car seats, but that actually only applies to U.S.-based carriers and flights within the United States. Romper regrets the error.

More Like This
6 Takeaways From The White House’s First-Ever Parents Press Conference
'Squid Game' Is Coming Back For Season 2 On Netflix: Here’s What Parents Need To Know
Way Too Many Parents Have Zero Plans to Talk About Sex With Their Kids
The Summer I Turned Pretty Is A Beautiful Coming-Of-Age Story For Teens & Parents