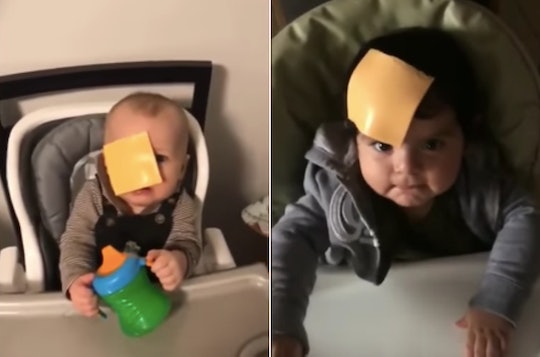 "Cheesing" Babies Is The Most Bizarre Trend Ever, But Why Is This Even A Thing?!

There are a lot of baby photo/video trends out there — who hasn't laughed at a video of a baby tasting a sour lemon for the first time? Recently, though, a new trend has gone viral and it could possibly be the weirdest one yet. If you haven't seen the videos while scrolling through your newsfeeds, "cheesing" babies is apparently a trend now and it's the most bizarre "challenge" I've ever seen. But, guys... WHY OH WHY IS THIS A THING?

There are a number of things everyone knows to be true, such as the fact that babies are very cute and pretty helpless/clueless. But instead of the normal cute baby videos you see online, there's a new "viral" challenge sweeping the internet called "cheesing," according to Fatherly. While some find the videos humorous, some feel a little uncomfortable and just thrown off by the whole phenomenon.

It's very bizarre and, honestly, kind of cringeworthy. I'm sure it's all in good fun and the babies in the videos are off giggling somewhere, but come on, people... there are definitely funnier things out there to make a viral challenge about.

Though some people on Twitter are loving this trend, others have a problem with throwing cheese on babies at the expense of some laughs online.

"Why would someone do that?" one Twitter user asked.

"Is this a thing that people do?" another Twitter user wanted to know. "Did I miss out?"

But, like the "mannequin challenge" and the "cinnamon challenge," it's likely that "cheesing" babies is nothing more than just that — a temporary viral trend that will die over soon enough.

But this trend isn't exactly new. Twitter users were doing the same exact thing in late 2018, but instead of throwing cheese on babies, they were throwing cheese on their pets and calling it "dog cheese", according to the Daily Dot. This resulted in some pretty confused pets, but they quickly became happy once they realized they could actually eat the cheese. This, in my opinion, is a much better alternative to cheesing babies.

But if viral trends aren't your thing, don't let perfectly good cheese go to waste. Put it in an omelet, pair it with your favorite cracker, or eat it with some fruit for a satisfying snack. Why "cheese" babies or dogs when, at the end of the day, you can just cheese yourself?

More Like This
Reddit Is Not Impressed With Dad Who Hid Neighbor's Gnome Because It Scared His Kid
'Caillou' Is Officially Getting A CGI Reboot Whether People Like It Or Not
'Squid Game' Is Coming Back For Season 2 On Netflix: Here’s What Parents Need To Know
Viral TikTok Breaks Down How Beautifully Bluey Depicts One Character’s Infertility