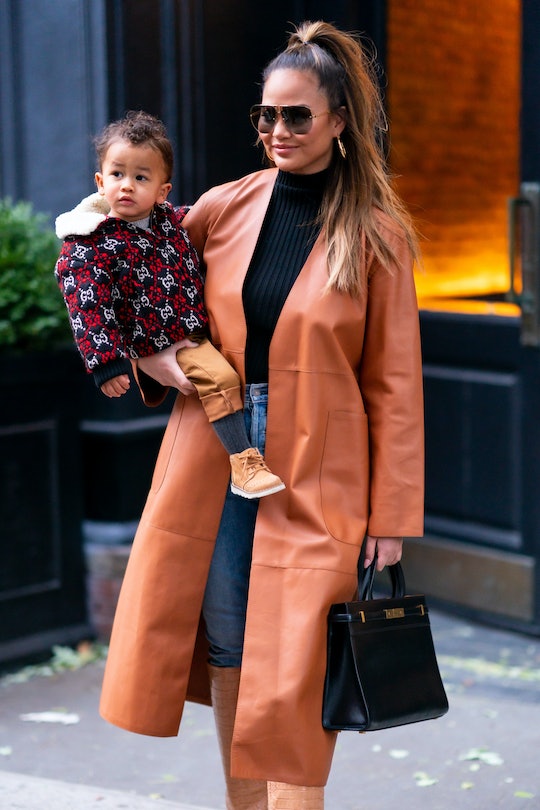 If you've ever tried to get in a little workout session with a toddler around, you just know... You know it's not going to be what you were picturing when you first set out for a little exercise. And now that Chrissy Teigen tried to do yoga while her son Miles crawled all over her, she definitely knows, too. It's like that yoga with goats thing if you had given birth to the goats and they were relentlessly seeking your attention.

Teigen and John Legend's son Miles is now 21 months old and getting seriously mobile. The climbing kind of mobile, apparently. Although little Miles appeared to be the slightly more docile of the Cravings cookbook author's two children, it looks like he could start giving his sassy older sister, 3-year-old Luna, a run for her money. Maybe not in the sass department, per se, but definitely in the activity department.

On Tuesday, Teigen shared a video of her attempt to get in a little yoga session at home. It was a lot of trying to find her zen as her toddler son climbed all over her and exclained, "Mommy! Daddy, daddy! ... Mommy!" As she captioned the video on Twitter, "very relaxing practice today!"

The busy mom was doing her best to get in a child's pose and loosen up her hips, but little Miles was simply not interested. Even when she stopped her practice to laugh and give him a snuggle, much like most toddlers he remained unsatisfied. He climbed up her back but, like the experienced mom she is, she gave a gentle little shake of her hip and he was down. Finally, he settled for putting his feet between her legs like it was his own special yoga move. I mean, he had to get her attention somehow.

Plenty of Teigen's followers knew exactly what she was going through and shared tales of their own yoga practice struggles with toddlers and pets alike, with one mom noting, "This is literally my 2 year old EVERY SINGLE TIME I attempt to work out at home!"

You can't blame Teigen for wanting to stick with her yoga practice, though. Particularly since she had an emotional moment at the end of a practice when Miles was 18 months old. A yoga instructor shared some words of wisdom with the mom of two and Teigen found herself nearly crying. As she wrote in a December post on Twitter, "I started yoga this week and my first class, after giving myself some belly complaints, the instructor said 'well didn't you just have a baby!?' and I said 'no, like 18 months ago' and she said 'that's JUST' and let me tell you, true or not I could have cried."

Miles will keep getting busier, as most parents know, but I suspect Teigen will find a way to fit in her yoga practice. She's going to need that zen even more now that she has two kids running around.

More Like This
Chrissy Teigen’s Son Miles Proudly Bragged About Knocking His Sister Luna’s Tooth Out
Should Parents Consider Delaying Covid Vaccines Until Closer To School Starting?
The Covid Vaccine For Kids Under 5 Has Been Sent To The FDA For Review
Viral TikTok Breaks Down How Beautifully Bluey Depicts One Character’s Infertility