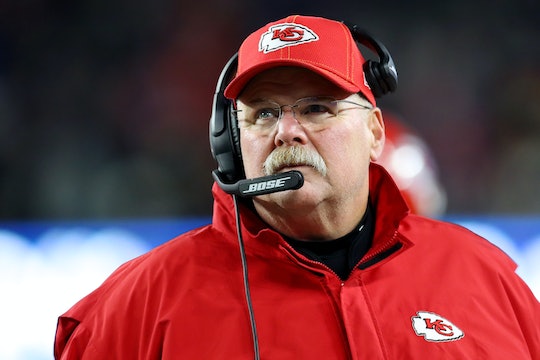 Over The Years, Chiefs Coach Andy Reid & His Family Have Overcome Serious Tragedy

The Kansas City Chiefs are heading to Miami for the Super Bowl on Sunday, where they will play the San Francisco 49ers as something of the underdogs this year. While the team hasn't competed for the Super Bowl in 50 years, they certainly have people rallying behind them and it could in part be attributed to the love fans feel for the team's coach. In the past decade or so, coach Andy Reid's family has, unfortunately, experienced some real tragedy and adversity, and it seems as though fans want a Super Bowl win for him and his family almost as much as they do for themselves.

Reid and his wife Tammy were college sweethearts from their Brigham Young University days, according to his Kansas City Chiefs bio. They went on to have five children together, three sons — Garrett, Britt, and Spencer — and two daughters — Drew and Crosby. Life has not always been easy for the family, though. In 2012, they suffered a tragedy that no family should ever have to go through when their oldest son Garrett died of a heroin overdose after years of battling addiction, according to USA Today. Sadly, the news of Garrett's death was a terrible end to what appears to have been a long and painful time for the entire family.

Both Garrett and his brother Britt had previously been arrested for gun and drug possession charges in 2007, according to The New York Times. That same year, both Andy and Tammy Reid spoke with Philly magazine about getting their sons into rehab. It was a difficult journey for the couple, but one they tried to move through as a family. As Andy Reid, who was the coach of the Philadelphia Eagles at the time, told the magazine that he just wanted his sons to get well.

"At that point, you don’t really care, there’s no time to be mad or frustrated or this or that, you’ve got to get that kid help," he told Philly in 2007. "You don’t care if you’re Andy Reid, or Tammy Reid — you don’t care about all that. You care about that child."

In the wake of Garrett's tragic death, Reid was fired as the Eagles' coach, according to ESPN, and took just four days to find his new position as Kansas City Chief's coach, Sportscasting reported. His son Britt overcame his own addiction issues with painkillers, according to the Washington Post, and is now the linebackers' coach for the same team. The Reid family leaned on each other and was able to carry on.

And their fans couldn't be happier for them. After coaching for several decades, Reid has built up a fan base who wants to see him succeed both professionally and personally, even notoriously intense fans like the Philadelphia Eagles, apparently.

Despite the fact that he coached the Eagles for 14 years and never won a Super Bowl there, a recent ABC News poll found that 87% of Eagles fans want to see him win. A hashtag started by Philadelphia radio station Sports Radio 94 WIP called #ThankYouAndy had fans sharing their praise of the beloved coach. And one of the football players Reid coached, Donovan McNabb, referred to Reid as the "best" coach he ever had in a recent tweet, writing, "So happy for the guy. Best I ever had as a coach. That’s my coach. congratulations Andy Reid."