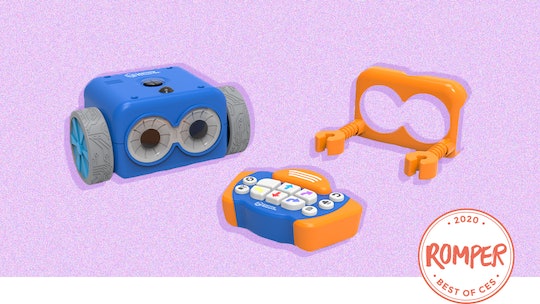 Botley 2.0 Is The Coding Robot With Actual *Secret* Activities & Codes For Kids

Many parents may already be familiar with the beeps and the boops of Botley — the incredibly cute coding robot. But like all tech, he is ever-changing, and coding robot Botley 2.0 will be here this spring. And this time, he wants revenge... Kidding! He just wants to entertain and educate your 5-year-old.

Botley 2.0 once again comes to us from Learning Resources — purveyor of smarty toys. The original Botley was named "Innovative Toy of the Year" at the 2019 Toy of the Year Awards. And for good reason — this sweet little wide-eyed bot manages to introduce coding concepts to little kids in a really fun and clever way.

I know when you hear the word "coding" you may think, "Oh god, I don't need yet another screen-time battle in my life..." But fear not, for Botley doesn't require any phones, computers, pads, or tablets. The coding is all done via a colorful remote programmer that has zero screens, and instead is outfitted with large, colorful buttons perfect for tiny, push-happy fingers.

Like the original Botley, the 2.0 comes ready to rumble, right out of the box, and makes the same adorable, vaguely Wall-E-esque robot sounds. But this version has all new games and challenges. Kids can play a game of "Botley Says," or perhaps they want to code a light show with Botley's new light-up eyes? There are loads of activities and options, allowing kids to build coding sequences of up to 150 steps.

Like the first Botley, he also comes with "hidden features," which is sure to keep the littles curious. When you tell them Botley 2.0 has secret codes that can turn him into a train, ghost, or police car? Well, that's sure to keep them busy. Or to keep you busy until you figure it out, and can you just hurry up and make Botley be a ghost, Mommy?!?

Romper got to check out Botley 2.0 at CES 2020, and yeah, he's just as cool as he sounds. Another especially cool feature? You can now have a total Botley party. Up to four Botley 2.0s can be used in the same room, with the robots interacting and competing in races, thus turning the whole coding experience into a collaborative process, and turning your living room into a non-stop beep boop concert. Which may require Advil, depending on your beep boop tolerance levels.

The price will depend on the set you purchase. The robot and programmer on their own go for $64.99, while the full activity set retails for $84.99 and features a 78-piece play set that includes detachable robotic arms, a second pair of glasses, as well as other cute accessories.

I also think it's worth noting that there are separate activity sets available for purchase. This is nice, as it keeps the toy fresh and fun, and from getting kicked under the bed along with the other once exciting, now forgotten toys. (I see you, Polar Express Train Set...) There's a little construction accessory set that turns Botley into a bulldozer and a wrecking ball, as well as a robot action challenge set which features quirky little items like a ball and slide, as well as some rather startled looking dominoes.

So prepare ye for April 2020, and the great robot uprising. At long last Botley 2.0 shall stake his claim on human-kind, and attempt to destroy us all... with giggles.