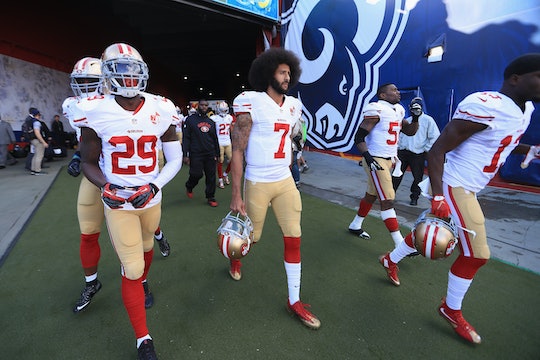 Colin Kaepernick's Mom Responded To Trump With One Perfect Tweet

On Friday night, while stumping for Republican senator Luther Strange in Alabama, Donald Trump went on a rant about NFL players who protest during the national anthem and called them "sons of a bitch." Sensing that he was talking about her son, Colin Kaepernick's mom responded to Trump just perfectly on Twitter over the weekend. Kaepernick, a quarterback who is currently unsigned to any team despite being really good at his job, first "took a knee" last year, protesting racial oppression.

Trump said at the rally for the senator who's looking to fill the seat left open by Jeff Sessions:

Wouldn’t you love to see one of these NFL owners, when somebody disrespects our flag, to say, ‘Get that son of a bitch off the field right now. Out! He’s fired. He’s fired!’

After Trump's unhinged rant, in which he accused the NFL of going under and losing ratings due to the changes the league recently made to make the game less violent and prevent head injuries. Because if there's one thing that a president should do, it's be in favor of traumatic brain injuries. "They’re ruining the game! That’s what they want to do. They want to hit. They want to hit! It is hurting the game," he said.

Trump then urged people to stop watching the NFL games or to just walk out of stadiums if a player protests the national anthem, which, he said, "disrespects our heritage." Trump has taken credit for Kaepernick's current employment status.

He said at a rally in March:

There was an article today…that NFL owners don’t want to pick him up because they don’t want to get a nasty tweet from Donald Trump. You believe that? I just saw that. I said, 'If I remember that one, I’m gonna report it to the people of Kentucky because they like it when people actually stand for the American flag.'

Trump disparaging Kaepernick and the other players who have started taking a knee during the anthem, instead of standing up is a dangerous thing to do. As always, it's hard to tell if he actually believes what he's saying or just playing to his crowd full of nationalists. Because those players aren't disrespecting anyone's heritage. Rather, the NFL has been disrespecting its players for basically ever.

Protesting is patriotic and there's no law that says anyone has to stand up and pledge allegiance to the flag or sing the anthem, even in a sports arena. While it's true that players make great salaries, more and more studies show that the actual rules of the game can cause chronic traumatic encephalopathy and the regulations about gameplay reportedly don't come anywhere near close to preventing CTE, which 99 percent of NFL players have, according to recent studies.

In addition to that, the league makes its money because of its players, 70 percent of whom are black. Taking a stand in the name of racial oppression or police brutality is something it should do to protect its own. It won't, if the cheering crowd at Trump's rally over the weekend is any indication. But its players have every right to stand up, or kneel, as it were.

The director of the NFL Players Association DeMaurice Smith said on Saturday that he knows the "peaceful demonstrations" aren't popular everywhere. But, he said:

Those opinions are protected speech and a freedom that has been paid for by the sacrifice of men and women throughout history ... No man or woman should ever have to choose a job that forces them to surrender their rights.

Now, if only that was something Trump understood.