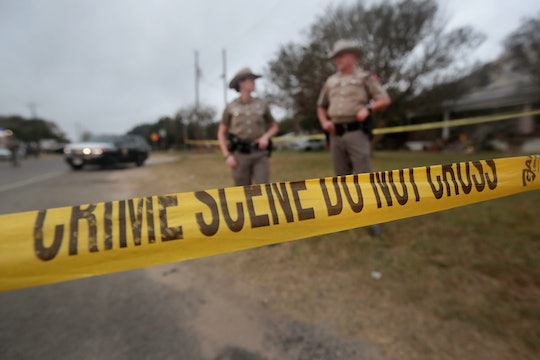 Columbine Is No Longer One Of The 10 Deadliest Shootings In The U.S.

On Nov. 5, a man opened fire inside a Texas Baptist church, killing 26 people — half of whom were children. This unimaginable act of violence, has "earned" a spot on a list no community wants to be a part of. Following yet another horrific mass shooting in the United States, the list of most deadly shootings in the nation has again shifted. In fact, Columbine is no longer one of the 10 deadliest shootings in the U.S. — and three of the 10 happened in the last year.

Yes, you read that correctly. CNN reported that the mass shooting at Columbine High School in Littleton, Colorado, now sits at number 11. Let that sink in for a moment. On April 20, 1999, two students walked into school armed with a number of weapons and killed 12 students and one teacher and then committed suicide.

The most recent mass shooting in Sutherland Springs, Texas now rests at the number five spot on the list of deadliest mass shootings. Here's the entire rundown of the top 10 deadliest shootings in the U.S., according to CNN:

In the wake of the mass shooting in Texas, American citizens and lawmakers are again asking themselves: What can we do prevent this from happening again? Because without action, it's only a matter of time until more people die in a mass attack. Contacting your state representatives is one simple way you can make your voice heard. Visit this website to connect with representatives and senators from your state.

Something else you can do is make sure to vote in local elections for officials who will vote for gun reform. Because although, yes, there are plenty of guns in other countries, there are also many fewer incidences of gun violence overall when compared to the U.S., as the result of those countries' stricter laws regarding who can own firearms. In July 2015, David Hemenway, director of the Harvard Injury Control Research Center and Harvard Youth Violence Prevention Center, explained:

The U.S. is average in terms of non-gun violence and non-gun crime. But we have many more guns, and much weaker gun laws, and thus far more gun deaths (e.g., gun homicides and overall homicides) than other developed nations. Not surprisingly, we also have many more mass shootings per capita.

Hemenway went on to use another developed country as an example of how gun safety policies can make a positive impact. He explained, according to a Harvard News article:

Australia, for example, reportedly had 13 gun massacres in the 18 years before the Port Arthur tragedy in 1996. The government's response to that tragedy was a massive mandatory buyback program of semi-automatic long-guns and a tightening of their gun laws. In the 18 years since, Australia has not reported a single mass shooting.

Upcoming elections for state representatives and senators — with many being held Tuesday, actually — include the following, according to Usvotefoundation.org:

If we want to put an end to mass shootings once and for all in the U.S., policy surrounding gun safety needs to change. This is something we can no longer ignore. And the change starts with us. Make sure your voice is heard.