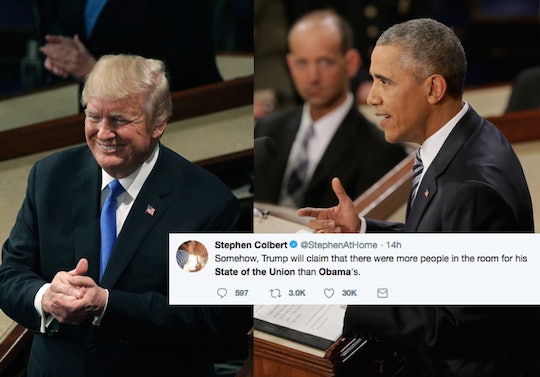 Well, it's happened. President Donald Trump gave his first State of the Union address Tuesday night, and a lot happened. Seriously, there was awkward clapping, hilarious mispronunciations, and a slew of other interesting moments. But comparing President Obama's and Trump's first State of the Union addresses is kind of like comparing apples and oranges (ha, get it, an orange), and trust me, I know how cliche that sounds.

Back in 2010, Obama had been in office for about a year, and he had already accomplished quite a lot, while also dealing with racism and slander from many conservatives. Now, while some may argue that Trump also has dealt with his fair share of criticism, it isn't exactly the same. During Obama's first State of the Union, delivered on Jan. 27, 2010, the nation was recovering from a recession passed to Obama by President George W. Bush's administration, according to Forbes. Trump's first speech to the joint session of Congress was different in that way, as well as others. While Obama spent a large portion of his speech looking at the issues facing Americans and admitting to certain pieces of legislation that he wasn't proud of, Trump mostly applauded himself (literally) and looked to the crowd for encouragement.

Obama also wasn't embroiled in a number of different scandals during his first term: Trump has faced sexual assault and harassment allegations (which he has denied) from a number of women; his administration is being investigated by the FBI for collusion with the Russian government; and he is currently facing allegations that he had an affair with adult film actress Stormy Daniels — and that he paid her to keep the affair a secret prior to the election. Both Daniels and Trump have denied those allegations. Imagine if Obama had gone into his first SOTU with all of that baggage... Here are other ways his first address different from Obama's.

Even though the first year of Obama's presidency was filled with many trials and tribulations, he managed to stand tall and proud as he delivered his first State of the Union address. Explaining the elephant in the room, per CNN's transcript of the speech, Obama said,

And if there's one thing that has unified Democrats and Republicans — and everybody in between — it's that we all hated the bank bailout. I hated it.

To help solve the nation's recession, Obama introduced the American Recovery and Reinvestment Act of 2009, a stimulus packaged (also known as the "bailout") aimed at creating jobs and saving existing ones. After making a joke that compared the bailout to a "root canal," Obama's first SOTU address noted that being president meant making hard decisions. "But when I ran for president, I promised I wouldn't just do what was popular, I would do what was necessary." A lot of people weren't happy about that multi-billion dollar stimulus package, but according to Obama, it was necessary.

He said of the bailout during his address: "If we had allowed the meltdown of the financial system, unemployment might be double what it is today," he explained. "More businesses would certainly have closed; more homes would have surely been lost." Obama was are of the stimulus package's unpopularity, but he pushed it forward anyways, and it led to a vastly lowered unemployment rate, according to an analysis from the Center on Budget Policies and Priorities.

Trump Couldn't Admit He'd Made Any Mistakes, Though

Trump, on the other hand, didn't address his own unpopular policies or note why they were important despite that unpopularity; instead, he talked about the horrors the previous administration had left for him to deal with and just how well he was doing with it all. Like Obama mentioned the unpopular stimulus package, Trump could also have mentioned some of his executive orders or pieces of legislation that haven't been very well received (remember the Muslim ban, y'all?).

Trump's Speech Was Full Of Inaccuracies

Now, while Trump's speech certainly was well-written, that doesn't mean it was all that similar to Obama's. NBC News has a nifty comparison chart that analyzes the transcripts between any two presidents' State of the Union addresses, and its comparison of Obama's and Trump's is certainly a trip.

Specifically, the word-cloud machine found that the most common words used by both Obama and Trump were "Americans," "people," and "year," unsurprisingly. However, that's about where the similarities ended. Trump couldn't help but brag on himself a little (read: a lot), even if it wasn't all that factual. Per CNN's transcript of his speech, Trump spoke a lot about immigration:

The first pillar of our framework generously offers a path to citizenship for 1.8 million illegal immigrants who were brought here by their parents at a young age -- that covers almost three times more people than the previous administration. Under our plan, those who meet education and work requirements, and show good moral character, will be able to become full citizens of the United States.

But that doesn't mean that everything he said was true. Much of it was false or misleading, according to fact-checkers at CNN.

While Trump explained that he wanted his speech to unite both sides of the political aisle, much of his rhetoric did the opposite. Specifically, Trump's use of the term, "chain migration," had many Democrats upset. According to Politico, Sen. Richard Blumenthal, a Democrat from Connecticut, explained in an interview that, "The tone was of a divider-in-chief." He continued, "It was a red-meat appeal to the anti-immigrant base of his party, not the unifying, coming-together appeal that we all know is necessary."

Trump also made a number of comments that suggested immigrants are to blame for most of the crime in the United States, which is not true. One of the guests he brought to his address was the mother of a teen murdered by gang MS-13, which was started in Los Angeles. He used rhetoric similar to past speeches, when he has inferred that we're accepting immigrants with no valuable skills or intelligence.

He also hammered home a four-point immigration plan, which would include revising current law to limit when the family members or children of immigrants can stay in the U.S.

Additionally, Trump's speech relied on quite a lot of biased language that would rally conservatives together, such as reminding viewers that "we proudly stand for the national anthem," a fairly blatant attack on the black athletes who have kneeled in protest of police brutality.

The comparisons between Obama and Trump's respective first State of the Union addresses are hard to make. Obama's presidency focused on bringing people together despite so many things trying to divide the American people. So far, the Trump presidency has been especially divisive, and while his attempt to unite both main political parties at his speech were present, they really weren't strong enough to get the job done.