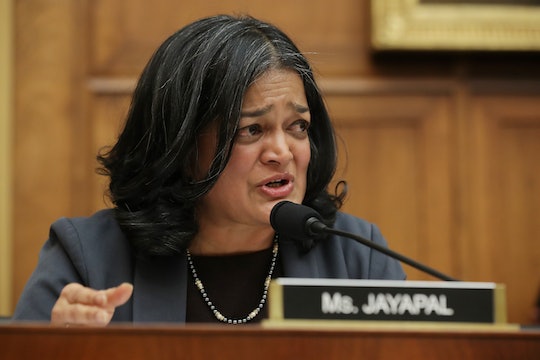 Sometimes as mothers, we tend to try to keep our emotions in check. Probably because raising children is such a minefield of emotions, we worry that opening those floodgates would surely cause disaster. But every once in awhile, a mother has to give herself a moment and just feel the thing, you know? Especially when she's fighting for something incredibly important. And when this congresswoman gave a tearful speech about her gender non-conforming child, she was overcome by emotion. And it turns out it's perfectly OK for her to get emotional at the end of the day.

Washington State Rep. Pramila Jayapal was speaking in Congress on Tuesday about the Equality Act, as The Guardian reported. This is a bill she co-signed that would amend the former Civil Rights Act from 1964 to include LGBTQ people as a protected class under federal law, as well as expanding the rights of other groups already protected under the Civil Rights Act.

While speaking in front of members of Congress during a committee hearing, Jayapal explained that she believed that denying members of the LGBTQ community protection means that "we are talking about fear versus love. We are talking about fear versus freedom," according to HuffPost. Then she paused, took a breath, and made a decision to go off script to explain why the Equality Act is deeply personal to her.

Choking back tears (and apologizing for them because this is still a thing we do, unfortunately), Jayapal said, according to Newsweek:

And I didn't intend to say this today, but — excuse me. My beautiful now 22-year-old child told me last year that they are gender non-conforming. And over the last year I have come to understand from a deeply personal mother's perspective — I've always been a civil rights activist. I've always fought for my constituents and communities to have equal rights. But from a mother's perspective I came to understand what their newfound freedom — it is the only way I can describe what happened to my beautiful child — what their newfound freedom to wear a dress, to rid themselves of some conformist stereotype of who they are, to be able to express who they are at their real core.

This was a powerful, moving reminder of the real lives that are touched by policy changes like the proposed Equality Act. That there are actual humans who need protection to be allowed to enjoy their lives peacefully as exactly the person they were meant to be.

As Jayapal so eloquently put it, according to The Guardian: "The only thought I wake up with every day is that my child is free."

Understandably, her emotional speech is being hailed as a thing of beauty and strength by others on social media by other strong women, like New York Rep. Alexandria Ocasio-Cortez. "People often think strength is holding back tears, or that bravery is checking your life at the door for another day," she wrote on Twitter. "To me, bravery is the courage to be vulnerable in front of the world. &Strength can be finding the power in your tears. @RepJayapal, you were all power today."

If the Equality Act is passed, it will provide non-discrimination protections for people in the LGBTQ community in some very real ways in the areas of credit, housing, employment, and education, according to Human Rights Watch. It would protect people from being discriminated against in public places.

The Equality Act would go a long way to helping everyone be free like Jayapal's child. And if that's not something to get emotional about, I don't know what is.