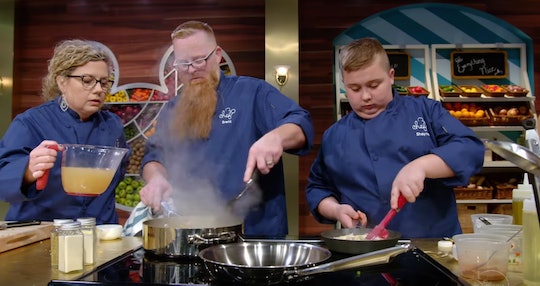 If you love Disney, cooking shows, and The Office, oh boy... are you in for a treat. A new competition-style cooking show with Angela Kinsey is coming to Disney+ next month and it's sure to be a hit with the whole family.

The premise of Be Our Chef is simple: five "food loving families" compete against one another after being tasked with creating dishes inspired by beloved Disney characters, like Olaf and Cinderella. After some intense cooking in the kitchen, the dishes are judged by "legendary" Disney chefs. The winning family is then awarded with an amazing grand prize: their culinary creation will be served at the Walt Disney World theme park in Orlando, Florida. Yes, it's that serious.

"I just love seeing families in the kitchen, cooking together," Kinsey says in the official trailer for the first season, which debuted on Wednesday. But with such high stakes, there is bound to be some drama and cooking fails. For instance, the trailer teases a moment when a napkin catches on fire and some baked goods being spread too thin. "It's all fun and games until we lose," one young competitor says. "Then it's on."

If you're not already subscribed to Disney+, Be Our Chef might be a good reason to do so for other foodie fams. For $6.99 a month, you can get access to hundreds of movie titles, shows, and original content. And if you haven't already signed up for a seven-day free trial of Disney+, you can also take advantage of that promotion. Either way, be sure to mark your calendars: Be Our Chef starts streaming on Disney+ on March 27.

More Like This
Exclusive Eureka! Clip Introduces Star Of Disney’s New STEAM Preschool Series
Janet Jackson's Son Eissa Is A Little Musical Prodigy In The Making
Princess Charlotte Got So Excited To Shake A Royal Fan's Hand
Prince George Hosted A “Little Cake Sale” For One Of His Dad's Favorite Charities