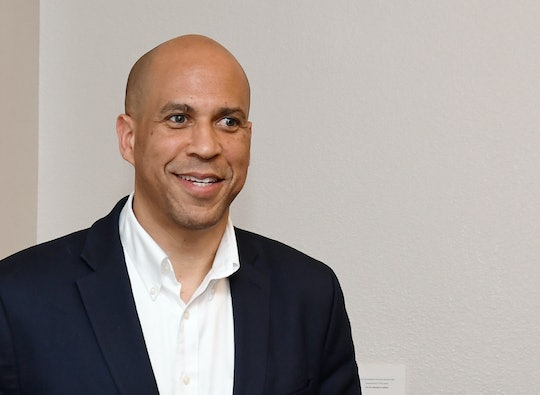 Ahead of the 2020 presidential election, voters are trying to familiarize themselves with the policies and stances of each candidate before heading to the polls. New Jersey Sen. Cory Booker has emerged as a presidential hopeful to watch, impressing folks with his progressive policies and, most recently, his thoughts on abortion as more and more restrictive legislation sweeps the nation. In an impassioned open letter to men, Cory Booker's stance on abortion was made clear as he called on them to support women's reproductive rights and freedoms.

The New Jersey politician penned the letter on Friday for GQ magazine, following news that Alabama passed a law that would outlaw essentially all abortions in the state. In it, the 50-year-old senator called on men to "listen, to speak out, and to take action." Booker noted in his open letter that this is not only essential because women are "our mothers, sisters, wives or friends," but because they're "people" who deserve autonomy over their bodies" and "women should not have to face this fight alone."

Booker went on to say, explicitly, that this type of legislation isn't just an affront on women, but rather is designed to target women of color, those living in poverty, and in rural areas.

"These far-right attacks on women's rights must be understood as an attack on all of our rights. But we also need to understand who these types of bills were designed to control, dehumanize, and criminalize," Booker wrote for GQ, adding:

Women of color, low-income women, and women living in rural areas in states that have restricted and sought to criminalize abortion will be disproportionately affected. They may be unable to afford to travel to a different state — which could also mean missing work and arranging for childcare even while enduring lengthy 72-hour waiting periods — in order to get the health care they need. They can't afford to pack up and leave — and we won't let them weather this storm alone.

Booker recently outlined his plan, should he become President of the United States, to protect abortion rights, according to an interview with BuzzFeed News. The politician explained to the news outlet that he would put legislation in place to ensure that abortion rights are protected nationwide and that he wouldn't be deterred by the Supreme Court attempting to overturn Roe v. Wade, should it come to that, as many fear that may happen.

"The injustices we're seeing in Alabama right now with this legislation... it's important that all of us understand that this is a threat to women's freedoms and women's rights all over our country, not just there," Booker told BuzzFeed News.

Booker's views on abortion aren't new; he's long been an advocate of the right to choose. In 2013, in fact, Booker's campaign spokesman, Kevin Griffis, told Politifact, the presidential hopeful "believes that a woman's health decisions should remain between her and her doctor," and "Mayor Booker supports Roe v. Wade, which allows women the right to choose up to the point of viability." Additionally, Griffis said Booker did not "oppose restrictions on post-viability abortions if exceptions are made for the health and the life of the mother." This means Booker, at least at that time, supported late-term abortions. These medical procedures are, as The New York Times explained, rare and would be performed at or after the 21-week mark in pregnancy.

While he's hardly the most progressive Democratic presidential hopeful when it comes to abortion care and access, Sen. Booker does make some points that are both necessary and exciting to potential voters. As the current administration continues to see to it that women as well as LGBTQ and non-binary communities have fewer rights over their own bodies, voters are undoubtedly eager to hear candidates planning to forge a different road in the future.