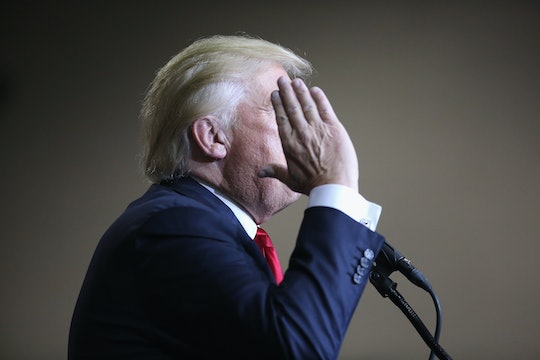 Could Republicans Force Trump To Drop Out? The GOP Has Lost Control Of Its Candidate

The slow-moving train wreck that is the Republican presidential ticket just keeps getting more and more bizarre, as GOP presidential nominee Donald Trump seems to be on some unhinged campaign to see just how far he can shove his foot into his ginormous mouth. Between dismissive comments about Khizr Khan, to Trump's Purple Heart gaffe, to his refusal to endorse House Speaker Paul Ryan, the world, and more importantly, the Republican Party, have uttered a collective "WTF?!" over Trump's behavior this past week. Could Republicans force Trump to drop out?

Sadly, according to RNC rules, Trump must voluntarily quit the race — he can't be actively forced to drop out from the campaign now that he's been nominated. Well, boo. And here I thought election season was just about to get really interesting. But what's particularly telling is that senior GOP leadership would even consider the possibility, indicating that Trump may be harming the GOP more than doing it any good. An unnamed source told CNN that the party was not "actively preparing" for Trump to drop out — but noted that if he did exit the race prior to Sept. 1, the GOP would still have enough time to nominate and put forth another candidate in order to remain on the ballot in November.

If Trump were to drop out from the race, you can bet your bippy it wouldn't be pretty. Within the last 48 whirlwind hours of Trump's bloviating, he's already begun setting up a careful and possibly deliberate narrative for November's likely outcome, as analyzed by Slate's chief political correspondent, Jamelle Bouie. "I’m afraid the election is going to be rigged, I have to be honest,” Trump said at a campaign rally in Columbus, Ohio. Speaking later to Sean Hannity of Fox News, Trump went on: “I’m telling you, November 8th, we’d better be careful because that election is going to be rigged. And I hope the Republicans are watching closely, or it’s going to be taken away from us."

This is some seriously f*cked up and straight up insurgent rhetoric that could actually affect 240 years of continuous democracy in the United States. By insinuating that this year's election is neither free nor fair, Trump could undermine the legitimacy of our election process. Saying the election is rigged — and notably, only in the event that he loses — could actually threaten a peaceful transfer of power from one leader to the next. If Trump drops out of the race, he may as well toss a lit match onto election kindling already soaked with the bitter lighter fluid of disillusioned, anti-establishment voters.

Even if Trump has no personal plans to exit the presidential race, his staffers allegedly have other opinions — and it's starting to get ugly within the Trump campaign:

And given that Democratic presidential nominee Hillary Clinton continues to outpace Trump's fundraising efforts, Trump might not have a choice to exit — unless he's ready to declare his 7th bankruptcy if he has to personally foot the bill for the remainder of his campaign.