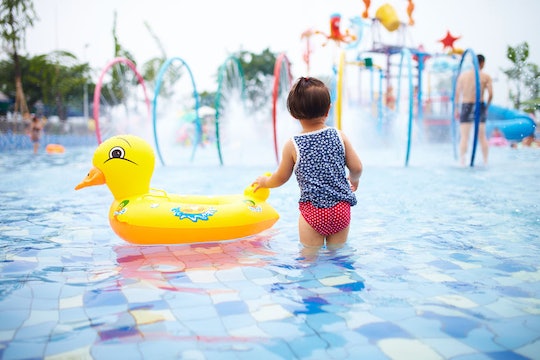 Everything To Know About 'Crypto', A Poop Illness Caused By Pools

Summer vacation means spending extended hours at the swimming pool, catching some sun and cooling down in the water. But this super fun, family-friendly activity can also have some downsides, and parents should be aware. According to the Centers for Disease Control and Prevention, "crypto" cases from swimming pools are on the rise, and here's why parents will want to pay attention to this news.

Getting a sunburn and having enough snacks at the pool won't be the only thing that parents should be worried about this summer when they go on vacation or take their kids out to the pool. In addition to both of these things, parents should be concerned about their children becoming sick once they hit the water. This is because outbreaks of cryptosporidium, or crypto — a diarrhea-causing parasite that can survive for more than a week in a swimming pool, according to USA Today — have continued to increase, as explained in a new report from the CDC, and it's all related to being in swimming pools.

According to the new report, crypto cases in the United States and Puerto Rico have continued to increase by an average of 13 percent each year. Although these outbreaks are quite common, it's completely understandable if you haven't heard of it yet. Crypto is often defined by its not-so-nice symptoms (which involve heavy diarrhea) rather than its name. Still, there is plenty that parents need to know about it before slathering sunset on their kids and throwing them in a swimming pool with other sick kids.

Crypto can mainly be caught in two ways — swimming in a pool that someone with diarrhea has been in or touching an infected animal, according to the CDC. But in the summer, more often than not, people catch crypto from pools. Unfortunately, it's a pretty serious parasite to catch. People with crypto can have profuse, watery diarrhea for up to three weeks once they catch it, according to USA Today — and any parent who has recently touched (and changed) a very messy diaper knows that this is not fun. It mainly affects kids ages one through four, according to People, which isn't great to know, either.

So how do people become infected? By ingesting the pool water, according to Live Science. Anyone who might open their mouths while swimming have the possibility of catching crypto. So, parents who are paranoid about their kids catching it, or adults who don't want to deal with the side effects, should either remain out of the water or be very aware of their mouths while playing or swimming in the pool.

It's just as easy to prevent crypto — those who have diarrhea should avoid going in to swimming pools and avoid these situations for at least two weeks until after their symptoms resolve, as to not spread it to anyone else around them. People should also practice good hygiene to avoid it being spread, according to the Mayo Clinic. This means washing their hands, avoiding fecal exposure, and limiting the amount of times they touch their face.

Prevention is super important. The last thing any kid wants to be is sick during the summer and these symptoms are not something that those kids (and their parents) want to mess around with. In addition to severe diarrhea, crypto can also cause dehydration, weight loss, nausea, and severe cramps, according to Mayo Clinic.

No one should let one fun day in the sun turn into three weeks of chaos, especially in the summer. Those who are sick should avoid swimming pools and those who are afraid of sick should keep their mouths closed while swimming to avoid catching crypto. Sometimes the smallest actions prevent the biggest things from happening.