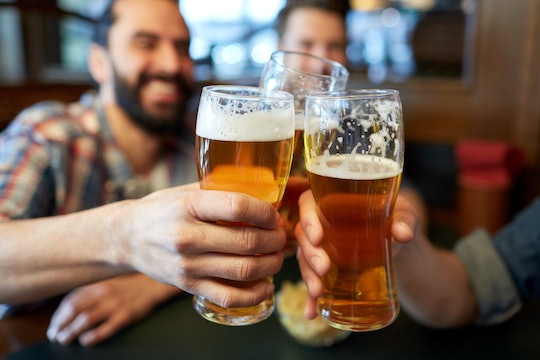 Dads Are Out ~Having Fun~ While Moms Do Housework, Study Finds

Navigating domestic roles once children come into the picture can be a difficult process. Despite the modern preference for egalitarian households, women are still doing more work than their male partners. In fact, one recent study found that dads chill or go out while moms work around the house when both have days off.

This study, published online in the journal Sex Roles, determined that three months after the birth of a family's first child, on those days when both parents are off of work, men can usually be found relaxing or having fun while women are busy working around the house or caring for children. Further lengthening the divide, when the men were engaged in these domestic duties, women tended to be doing them as well. Specifically, women spent 46 to 49 minutes relaxing while men performed child care or housework on their day off. Men, on the other hand, spent about 101 minutes relaxing while their partners did some kind of work, according to Science Daily.

The study, known as the New Parents Project, included 52 couples who were primarily well educated, white, dual-earners from the Columbus, Ohio, area who were having their first child.

It is unknown if these results would be mirrored in a more diverse sample, but Claire Kamp Dush, lead author of this study and an associate professor of human sciences at The Ohio State University speculated to Science Daily that it could be even more uneven:

I was expecting to see a lot more minutes where the couple was doing some kind of housework or child care together. I suspect the situation may be even less equitable for women who don't have all the advantages of the couples in our sample.

Kamp Dush explained that the sample size was small and limited because of how difficult it was to conduct the study. She told Science Daily that the researchers were unaware of any comparable study wherein both parents kept detailed diaries of their activities on the same days and times. The diaries included data from workdays and non-workdays during the third trimester of the woman's pregnancy to roughly three months after the baby's birth.

Co-author of the study, Jill Yavorsky, received her Ph.D. at Ohio State and is now an assistant professor of sociology at the University of North Carolina at Charlotte. According to Science Daily, she said that the workload was much more even on working days as compared to days off:

On non-workdays, parents are more evenly splitting housework and childcare. It's very much 'all hands on deck' but when there is more time available on the weekend and parents are not so pressed to get everything done, then we see the emergence of gendered patterns and inequality where women do a lot more housework and childcare while he leisures.

These patterns are troubling, but not a life-sentence. Kamp Dush told Science Daily that there are steps that couples can take to lessen the gender gap that is seen in this study and break bad habits. She said that men need to take the iniative to do more around the house and with their children, while women need to allow men to tackle more without hovering and evaluating their performance.

The latter recommendation may be a bit more difficult than it sounds. A recent Baby Talk poll found that overall, women are not very confident in their partner's parenting abilities. According to Parents, only 48 percent of women polled reported feeling good about their husband's abilities when it comes to caring for their children. Issues of confidence may need to be addressed here as well.

As is the case with many relationship issues, communication is key to overcoming domestic inequality. Kemp Dush told Science Daily that she recommends parents have conversations about changing roles early on to avoid creating unbalanced routines.

In a previous study, Kemp Dush determined that loss of equality in the home only really becomes an issue after children enter the equation. According to The Washington Post, she found that those families claiming to want egalitarian marriages lost that balance once they had children and dads cut back on housework. These couples, too, fell into routines similar to those seen in her recent study. In her article published by The Conversation, Kemp Dush explained how these habits are formed:

When families experience big transitions or changes, family members have to create new roles and routines to accommodate the change. Thus, the transition to parenthood is a critical juncture in families whereby men and women create new routines and roles as mothers and fathers that may persist for years.

If these issues are not addressed, they can have lasting effects on mothers. According to Scary Mommy, researchers from Cornell University, the University of Minnesota, and Minnesota Population Center found mothers to be less satisfied than fathers with their parenting duties, in large part due to stress. Inequality in the home can also ruin a marriage, according to ABC News Australia. An uneven workload was found to be one of the top four causes of divorce.

The more that is known about this phenomenon in families, the more couples can do to overcome it. Given the impact that it can have on happiness and family wellbeing, conversations about sharing responsibilities are seriously important. When individual burdons are eased, everyone wins.