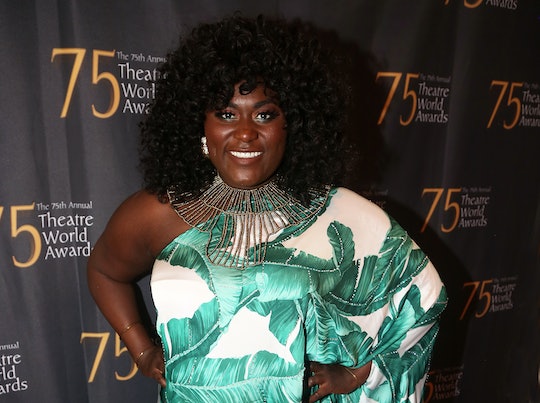 Going into labor is incredibly painful, but Danielle Brooks did "The Baby Momma Dance" challenge before giving birth this past November makes labor look like a breeze. She was able to dance through the pain and have a little fun before things got really intense, as evidenced in her most recent throwback Thursday Instagram post. And if the video is an indicator, she has got some serious moves.

Brooks took to Instagram to share a hilarious throwback photo of her dancing just hours before giving birth to her first child. She can be seen in the video wearing comfortable clothes and dancing in a stairwell to "The Baby Momma Dance" by Starrkeisha. Brooks shakes her hips and gets low when the song instructs her to "drop it down, drop it down real low" but she also seems to work through some of the more painful moments by breathing out of her mouth and stopping at the end of the dance to clutch onto the stairs and work through a contraction. "Was in the middle of contractions and had to stop for a little moment of fun," Brooks wrote in the caption of the video.

You can tell that she definitely had a lot of fun before she finally gave birth to her daughter on Nov. 16, 2019. Just two months later, in January, Brooks announced that she had named her daughter Freeya, according to People.

Brooks' followers are loving this super fun throwback. "This is so amazing and joyously fun!," one commenter wrote.

"But when that contraction hit... whew chile," another commenter observed.

Brooks isn't the first celebrity to do "The Baby Momma Dance" challenge, as U.K. radio station Capital FM reported. Singer Kehlani danced to the song in a now deleted Instagram video when she was pregnant with her first child last year. Shay Mitchell even shot her own fabulous YouTube video dancing to the song this past October in an attempt to induce her own labor. Although other participants may have done different dance moves or wore a fun outfit, Brooks real time contractions might make her "Baby Momma Dance" challenge video one of the best, yet.