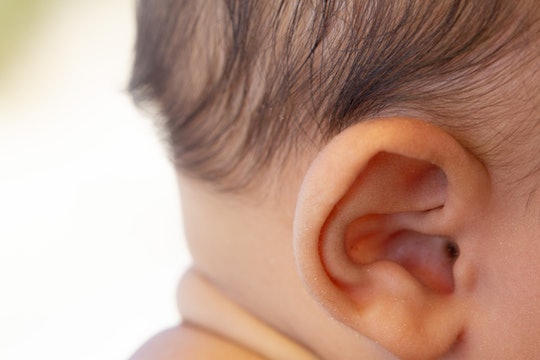 When babies struggle with hearing loss, parents go above and beyond to help their little ones and will try to learn as much as they can about their condition. And a new study, published on Wednesday in the journal PLOS One, examines how deafness affects how babies learn in relation to their ability to see. The study's findings show that babies with hearing loss may be concentrating harder on what they look at than their hearing counterparts.

Studies have long shown that hearing loss also changes the way a person sees. What’s been a little harder to pin down is whether it affects vision in a positive or negative way. Some studies have shown that people who are deaf are better able to process visual stimuli, according to Nature, while others seem to indicate that it's more difficult.

One study published in Trends in Cognitive Science, for instance, proposed that “the changes are not, however, widespread but are selective, limited, as we propose, to those aspects of vision that are attentionally demanding.”

This new study, the first of its kind, seems to back up that theory as it shows that infants take significantly longer to get familiar with things they are looking at.

The new study’s co-author, Claire Monroy, who is a postdoctorate otolaryngology fellow at the Ohio State University Wexner Medical Center, explained: “This is somewhat counterintuitive because a lot of people assume that deaf children compensate for their lack of hearing by being better at processing visual things, but the findings of the study show the opposite.”

For the study, researchers placed babies aged 7 to 21 months old in front of screens that displayed different images. When an infant becomes familiar with an object, they will look away from it, a process called habituation, according to the study. Researchers noted that deaf children looked at the objects for a significantly longer period of time.

Derek Houston, associate professor of otolaryngology at Ohio State commented on the study's findings: “These results were surprising because you wouldn’t expect there to be such profound differences in a test that really has nothing to do with hearing."

What’s also surprising is the fact that the longer habituation process doesn’t necessarily mean that deaf children are slower to learn. Rather, it may mean that they are paying more attention to things in order to take in more information.

“Because they use vision to process the world around them they may pay closer attention to visual objects,” Houston said. “They might actually be processing more about each object.”

This research seems to indicate that deaf children are learning about the world in a profoundly different way than their hearing counterparts.

Monroy noted that one of the challenges of this research is that there aren't good measurements developed yet for testing the cognition of deaf babies. "It’s important to keep in mind that all of the assessments or ways that we evaluate cognition in infants is that we use methods that have been developed for hearing babies and hearing children," she said, adding that their goal is "to uncover the ways in which these babies are different."

"It might be that these tests that have been developed for hearing babies are just not appropriate for testing cognition in deaf babies because they might just be so fundamentally different that their cognition might just measure differently," Monroy explained. "We see it more that they just develop differently and we want to understand those differences."

Hearing loss has been proven to affect the development of language skills and often goes undiagnosed until a child is struggling in school, according to Healthy Hearing. But studies show that early intervention and parental involvement can help a child succeed. This latest research may go a long way toward understanding how deaf children process information so that teaching can be tailored to their needs.

Monroy noted, however, that parents can easily be overwhelmed by a diagnosis of deafness that interventions aren't utilized well.

"I think for some parents it's so overwhelming that they kind of freeze, they find it so difficult that prevents them from following up with their clinicians and the audiologist and communicating with them," she said.

If there's one thing she would urge parents to do, though, it's to take advantage of resources available to them. "I think fostering a relationship with their clinician, the speech language clinician and the audiologist and working closely with them," Monroy said. "Because that speech language pathologist is really going to be kind of the key in helping their child learn to adapt."

Monroy also noted that there are a lot of support resources for parents these days, too, though people living in rural areas or in certain socio-economic groups may struggle to access them. "That's something that people are really trying to work on in the medical community," she said.

This study is really just the first step in more research to be done, Monroy pointed out. "I think at this point our study kind of opens up more questions than it answers," she said. "We showed that there are differences but we still don't know exactly why and whether these differences are the reason that older deaf children seem to struggle with specific kinds of cognitive skills."

But a first step is still a step, and in this research it's going in the right direction. Hopefully more can be learned about not only how deaf infants are learning about the world around them, but all deaf children. Adapting our teaching methods may be the key that allows them to excel in school and in life.