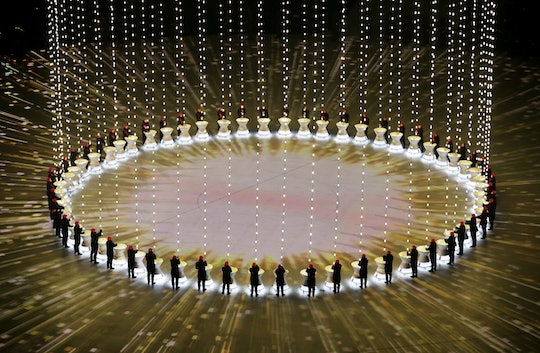 Did The Opening Ceremony Use The Disney Theme Music? The Tune Sounded So Familiar

The opening ceremony to the 2018 Winter Olympics in PyeongChang was, in a phrase, hauntingly beautiful. And the music really set the tone for the entire show. One song, in particular, seemed to be rather familiar. So familiar, in fact, that some viewers were wondering if the Olympic opening ceremony used Disney theme song music for the event.

The opening ceremony at the Winter Olympics was a seriously beautiful feat of pyrotechnics, particularly when a lifelike version of a massive snowboarder lighting the iconic Olympic rings in flames stunned the 35,000 spectators in the PyeongChang Olympic Stadium. As Natalie Cheung, general manager of the drone light show, told Wired, it was a seriously difficult vision to orchestrate. "In order to create a real and lifelike version of the snowboarder with more than 1,200 drones, our animation team used a photo of a real snowboarder in action to get the perfect outline and shape in the sky."

And the song playing as the snowboarders seemed to light the sky on fire sounded somewhat familiar. In fact, it sounded suspiciously like the Disney theme song, to be honest: magical and evocative to go along with the event.

While the song might have sounded somewhat familiar, it was not, in fact, the Disney theme song. Actually, the majority of the music played during the opening ceremony was K-Pop music. The United States Olympic team even entered the PyeongChang Olympic stadium to Psy's "Gangnam Style," arguably one of the best-known K-Pop songs ever.

The opening ceremony was certainly filled with music, and naturally the focus was on music from South Korea — specifically K-Pop, but also traditional songs native to the country itself. Like the song "Jeongseon Arirang," which was sung by Kim Nam-gi as the five children who frequently cropped up during the opening ceremony to signify the five Olympic rings appeared to arrive via a raft. The symbolism was meant to evoke the story of Korea's Miracle of the Hangang River, where "despite ordeals and trials, the buckwheat flowers rise up again to create the lovely and bountiful field. As they head towards a glittering modern city, the children watch fireflies rise up from the buckwheat flowers," according to the official opening ceremony program.

K-Pop songs might have been well represented during the opening ceremony, with "Gangnam Style" cropping up twice in the program, but that doesn't mean there weren't some emotional, recognizable stand-bys for the rest of the world. Perhaps most notably a heartfelt version of John Lennon's song "Imagine," sung by four popular Korean recording artists, Ha Hyun-woo, Jeon In-kwon, Lee Eun-mi, and Ahn Ji Young.

The lyrics to the song by the late, great Beatle felt especially poignant during the opening ceremony, as people from around the world watched with the ever-present awareness of tensions between North Korea and South Korea, as well as the United States and several other countries around the world. The leader of North Korea, Kim Jong Un, has officially embraced the Olympics and is allowing athletes to participate in the Winter Games, and South Korean officials have certainly taken great pains to make sure their neighbors to the north feel welcome. But some skeptics worry that this won't change much for the future of relations between the two countries.

It's been almost 70 years since the nation was divided into a North and South Korea. It would be nice to imagine that the two countries could find some common ground through the next two weeks of Winter Games, on a unified front.