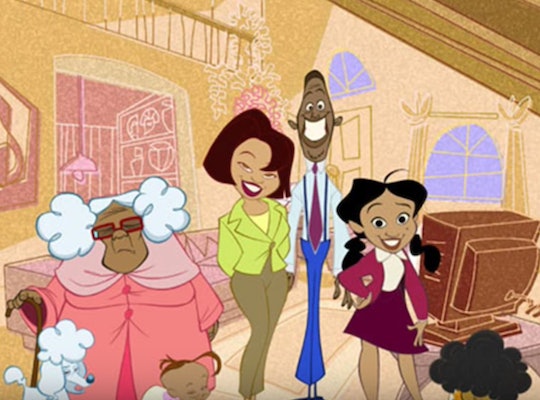 Don't panic or anything, but news broke today that Disney+ is officially rebooting The Proud Family with Penny, Oscar, Trudy, and more beloved members of the original voice cast. The animated show, which aired on The Disney Channel between 2001 and 2005, will get a new title and modern twist when it makes its way to Disney's streaming service sometime in the near future.

The Proud Family creator and executive producer, Bruce W. Smith, alongside original executive producer, Ralph Farquhar, will work on the new series together. "In our minds, the show never really went away, as we still had tons of stories left to tell," Smith and Farquhar told Deadline in a statement. "It's the perfect time to bring back this show, and we can't wait to take fans, old and new alike, on this journey with us."

The reboot, which is currently in production, will be titled The Proud Family: Louder and Prouder and plans to pick up where The Proud Family left off, focusing on Penny Proud, her wild and fun family, and her loyal group of friends. On top of this, the original voices of Penny, Oscar, Trudy, Suga Momma, Dijonay, Zoey, LaCienega, and Uncle Bobby are all set to return for the reboot, according to People.

Concept art for The Proud Family: Louder and Prouder shows that while Penny now has a smart phone, her family certainly hasn't changed.

Disney+ hasn't announced a premiere date for the reboot just yet. Until then, though, you can watch Season 1 and 2 of The Proud Family, which are currently streaming on Disney+ right now.

More Like This
Exclusive Eureka! Clip Introduces Star Of Disney’s New STEAM Preschool Series
The Summer I Turned Pretty Is A Beautiful Coming-Of-Age Story For Teens & Parents
Sesame Street’s Adorable Friends Parody Is A Father’s Day Treat For Dads & Kids
Chris “Ludacris” Bridges On Creating The World He Wants For His Daughters