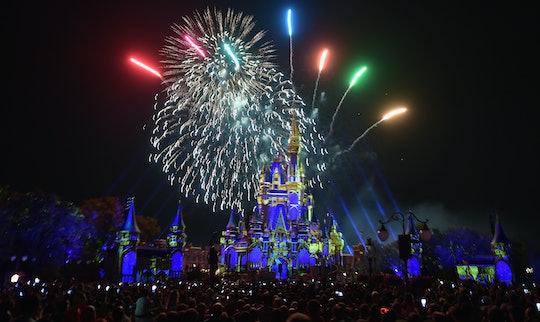 Get Your Passports: Disney Will Soon Host Its First Official LGBTQ Pride Event

The happiest place on Earth just got a little happier, at least at the Paris theme park. That's because Disney's first official LGBTQ Pride event is happening this year and it is set to be ~*magical*~. While Pride events have been held at Disney parks in the past, "Magical Pride" is the first of its kind due to the official Walt Disney Co. stamp on it. So here's everything you need to know about the special day.

On June 1, Disneyland Paris will be holding its first "Magical Pride" event celebrating the LGBTQ community, according to HuffPost. The event kicks off Pride Month and attendees can expect to “Dress like a dream, feel fabulous and experience Walt Disney Studios Park like never before — loud, proud and alive with all the colors of the rainbow,” according to the Disneyland Paris website.

No Straight News reported that the LGBTQ community has been organizing get-togethers and "Gay Days" at Disney parks for years, with the main event being held at Disney Paris for the past few years. But this year, Walt Disney Co. is making it official. The Disneyland Paris website lists rides and attractions, late hours, and a new parade “with a vibrant Pride atmosphere,” Additionally, Disney characters will be out and about participating in the fun.

A spokesperson for Walt Disney Co. and organizer of Magic Pride told NBC News that the event this year in the French theme park will be the first pride event officially organized and endorsed by Walt Disney Co. It is a part of a larger culture of inclusion:

Diversity and equality are strong values at Disneyland Paris, and each year, we host millions of visitors regardless of their origins, gender or sexual orientation. We are committed to fostering a welcoming environment for all of our Guests where magic is for everyone.

Disney has been embracing the LGBTQ community's presence more and more in the past decade or so. In 2007, Walt Disney Co. began allowing same-sex wedding in Cinderella's Castle, according to CBS News, making changes to the existing restrictions at the time requiring valid marriage licenses that were still not available in most states.

A decade later, the company faced loud backlash after including an openly gay character in the 2017 live action Beauty and the Beast film, according to The Hollywood Reporter. Josh Gad played LeFou, the Gaston's endearing and comical sidekick, who became Disney's first gay character. Director Bill Condon told Attitude in an interview that the move was a very deliberate decision:

LeFou is somebody who on one day wants to be Gaston and on another day wants to kiss Gaston. He’s confused about what he wants. It’s somebody who’s just realizing that he has these feelings. And Josh makes something really subtle and delicious out of it. And that’s what has its payoff at the end, which I don’t want to give away. But it is a nice, exclusively gay moment in a Disney movie.

And just last year, American Disney parks began offering rainbow colored Mickey Mouse ears in celebration of Pride Month, as Cosmopolitan reported. The move received mixed reviews, with some praising the promotion of diversity and others criticizing the company for potentially exploiting the LGBTQ community by selling the ears but failing to include more queer characters in its films.

When taken individually, each of these steps towards LGBTQ representation and celebration in the world of Disney is arguably not enough. But taken together, these deliberate moves towards diversity are an important sign that Disney not only recognizes, but embraces the community that has been a part of its world for so long.

More Like This
Chris Evans Has Choice Words For Critics Of The Same-Sex Kiss In 'Lightyear'
Activist Imara Jones On Raising Kids Who Celebrate Black Trans Identity
These Baby Boy Names That Start With O Are Officially Cool
I Started a Magazine for Gay Parents in 1998. Here's What's Changed Since Then.