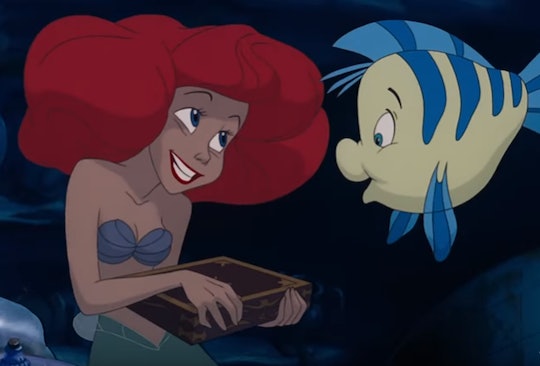 I am sorry to tell you this but sometimes swimming doesn't look all that elegant. Now why would a person assume that trying to move underwater should look seamless, graceful, and beautiful, you ask? One word: mermaids. Ever since Walt Disney Studios created the cartoon version of Little Mermaid, I'm pretty sure every girl and yes, maybe even some of us women have pictured ourselves swimming like mermaids, our hair floating around us, our bodies moving in one fluid motion. Sadly this has not been our reality... until now. Because now there's a Mermaid School at Disney World, so I guess that's another problem I can solve at the amusement park. (The list goes on.)

The geniuses at Disney Parks have decided to finally capitalize on the universal fascination so many of us have with mermaids. Or with one particular mermaid, Princess Ariel, the girl who lived under the sea but wanted to come up here on land with us despite the fact that mermaids are obviously cooler than people. As a Disney Park blog reported, guests ages four and older (which tells me even adults can join and I've never been happier), can visit Disney's Art of Animation Resort, Disney's Caribbean Resort, and Disney's Yacht and Beach Club Resorts in Orlando, Florida for the experience of a lifetime... Mermaid School.

Guests who sign up for Mermaid School will be outfitted with a swimmable "tail" and then taught exactly how to move through the water like a real mermaid, as per Parents. They will have the chance to swim around in the pool in their mermaid tail and clam shell bra (that last part is just me) for an hour, which seems like exactly the right amount of time to learn to swim with a tail attached. Mermaid classes will be offered on select dates for $50 per class plus taxes, and reservations are now open through 407-WDW-PLAY.

Probably I'll see you there.

It should be noted that being a mermaid is actually a real profession, and it's not as easy as it looks. A report by Bloomberg Business looked at the world of professional mermaids, and one mermaid named Linden Wolbert from California offered an under the sea glimpse at her world:

You have to tolerate chlorine and salt in your eyes and keep them open like it’s no problem. There are times when I get out of the water and I can’t even see to drive home.

Apparently she also has to be in pretty solid shape, able to hold her breath for long stretches of time, and perhaps worst of all, try to smile without swallowing water. Also her fin weighs 50 pounds, and some of us hopeful mermaids might not have the core strength for that.

It sounds to me as though Mermaid School at Walt Disney World is an easier option. You put on a tail, you swim for an hour. You get to pretend that Sebastian the Crab is singing to you from behind some coral.

I want to be part of that world for sure.

More Like This
Lyle, Lyle, Crocodile Is Heading To The Big Screen As A Musical Comedy
Marcel The Shell Is Officially A Movie Star
It's A Beautiful Day In Jenny Slate’s Neighborhood
10 Of The Raddest Movies From The '90s To Watch On Girls Night